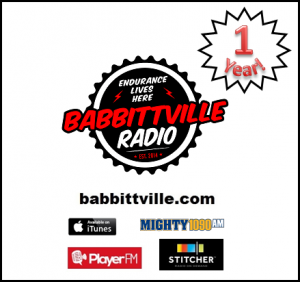 SAN DIEGO, CA – Bob Babbitt, USA Triathlon and Ironman Triathlon Hall of Fame Inductee, is proud to announce the one year anniversary of his Babbittville Radio show.  Launched on August 13, 2014, the show has received amazing support from the endurance sports community, and its audience continues to grow. The podcast has had over 500,000 downloads, and just closed out the month of July with 72,000 downloads.

“The best part about this show is that I get to interview the most amazing athletes in the world and share their stories with our listeners,” says Babbitt. “I don’t think a day goes by where I don’t appreciate how lucky I am to get to chat with past, current, and future endurance sports legends and share their insight with people who share that same passion for running, triathlon, cycling, and mountain biking.”

Babbitt originally created Competitor Radio back in 1990 and placed the show on The Mighty 1090 AM, the 50,000 watt all-sports radio powerhouse that reaches up and down the West Coast. “The reason I was so insistent on placing a show on an all-sports radio station in the beginning was so that people would be listening to an interview with a basketball, football or baseball legend like Magic Johnson, Willie Mays, Larry Bird, or Dan Fouts and then, a few minutes later, hear my interviews with Dave Scott, Paula Newby-Fraser, Greg LeMond, or Steve Scott and figure, if they are being interviewed on The Mighty 1090, these athletes must be big time stars as well and the sports they participate in must be important.”

Babbittville Radio is unique because the show airs not only on The Mighty 1090 AM in Southern California for two full hours every Sunday night, but the interviews also can be heard on babbittville.com, iTunes, Stitcher, and Player FM. 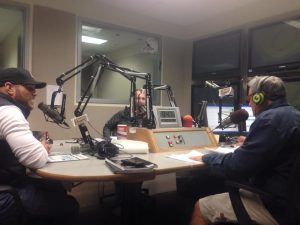 “I launched Babbittville Radio a year ago with my interview with one of the greatest Ironman World Champions ever, 6-time winner Mark Allen” continues Babbitt.  “Throughout this last year I’ve had the pleasure of  interviewing an amazing line up of World Champions, Olympians, Paralympians, cyclists, obstacle course athletes, race directors, coaches, authors, celebrities, and every-day athletes inspiring all of us to reach for new goals. I can’t wait to see where next year takes me on Babbittville Radio!”

In honor of the one year anniversary, Bob Babbitt selected 12 interviews that he feels spotlight all of what makes Babbittville Radio so special. Visit his Year One Favorites page to read about and listen to these interviews: Year 1 Favorites