Ever think about what kinds of animals we admire the most? Put it this way: When was the last time you heard of a high school calling its football team the jackals, hyenas, cows, sheep or tuna?

They call them eagles, sharks, tigers, lions, or falcons.

Otherwise known as predators. Peace, love, whatever: Everyone loves a fighter.

What separates us from the animals is that, at least when we’re not fighting wars or living in the inner city, we’re capable of ferocious competition in which nobody gets hurt and the losers survive to fight again. (When I say “nobody gets hurt,” it doesn’t mean that someone isn’t going to get his hair mussed up a little – I’m a boxing fan, after all — but you get the idea.)

Among the warriors I admire most are Ironman competitors. These pictures will show you why: 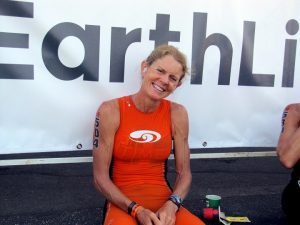 Ellen Hart before the swim. Ellen would go on to win the 55-59 division.

A warrior exiting the swim….

65 year old Jean Pierre Mastnak of France, on the bike 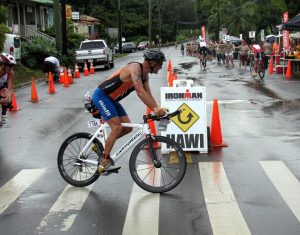 70 year old Hans Kunzi of Switzerland, at the turnaround in Hawi

At the Ironman, all warriors tackle the same course, including double amputee Jason Gunter, who rolled his ankle at the swim start, and battled problems with his prosthetic leg during the run.

How hot was it? So hot that when you spot a tub of ice, you jump off your bike, and DUNK!

Legendary age-group athlete, 71 year old Cherie Gruenfeld (hey, that name is familiar!) on her way to her 13th age division win, and her final Ironman Hawaii.

Iron Warriors Cherie Gruenfeld, with 13 age group wins, and Mark Allen, with 6 Ironman World Titles, together at the greatest finish line in the sport, as the midnight hour approaches

Daniela Ryf and Jan Frodeno were the Champion Warriors of the Day, winning the 2015 Ironman World Championship, then coming back to the finish line to greet the finishers all the way to midnight.