Jim MacLaren was a 300 pound football player at Yale. In 1985, he was on his motorcycle heading to an acting class in New York City when he was hit by a New York City bus and thrown 90 feet in the air. He was dead on arrival at the hospital but somehow survived and ended up losing his leg below the knee. He came back from that accident to become the best amputee athlete in the world, going 3:16 in the marathon and 10:42 at the Ironman in Kona.

In 1993 Jim was racing a triathlon in Southern California when a van went through a closed intersection, hit the back of his bike and propelled Jim into a sign post. He was now not only an amputee, but also a quadriplegic.

Two friends-Jeffrey Essakow and Rick Kozlowski- and I decided to put on a triathlon that fall as a fundraiser for Jim. We wanted to buy Jim a van he could drive with his hands. The goal was to raise $25,000 and we ended up raising $49,000.

A couple of amputee women came up to us at that event and told us how inspirational Jim had been for them over the years, but did we know that health insurance will cover a walking around leg or an everyday wheelchair, but anything to do with sports is considered a luxury item and not covered by insurance.

At that point we decided to create the Challenged Athletes Foundation and in our first 21 years we have raised over $55,000,000 to keep injured athletes in the game of life through sport. In 2014 alone we sent out 1,469 grants totaling $2.1 million dollars.

Emmanuel Yeboah and Jim MacLaren received the ESPN Arthur Ashe Courage Award at the ESPY’s in 2005. Photo by Tim Mantoani

One of CAF’s first sponsored athletes, Rudy Garcia-Tolson when he was still a young kid. Photo by Tim Mantoani 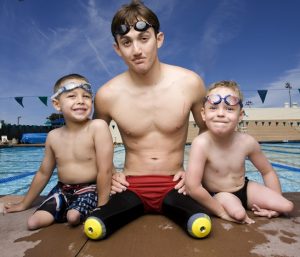 Rudy Garcia-Tolson has grown to be a mentor and role-model to amputee kids, such as Cameron and Cody shown here with Rudy. Photo by Tim Mantoani