The inaugural Breakfast with Bob: Boston Edition, presented by Hyland’s with NormaTec, was filmed at the Boston Marathon Expo April 15 – 17, 2016.

All the interviews can also be viewed on our Babbittville YouTube channel here.

Bart Yasso from Runner’s World kicked things off on Friday morning with a great interview. Bart has been at every Boston Marathon since 1982 and we talked about what makes Boston so special.

Boston Marathon Race Director Dave McGillivray is the heart and soul of the marathon. We were joined by Mike Ehredt who told us about the epic runs he has completed to honor fallen soldiers.

Olympian Des Linden and her agent Josh Cox joined us on Friday. We chatted with Des about her races here at Boston and what it feels like to be headed back to the Olympics for the second time.

65 year old Fred Schenck, the 1988 Philadelphia Marathon champion, ran 2:28 at the 1985 Boston Marathon. Through cross-training, recovery, and stretching, Fred is feeling better than ever and is looking to run fast again on Monday!

Gilad Jacobs is the main man at NormaTec. Our conversation was all about recovery.

John Maclean was the first paraplegic to finish the Ironman in Hawaii and swim the English Channel. His new book is How Far Can You Go?, and for the unstoppable John, who is walking again, there are no limits.

Marc Davis won a gold medal at the Goodwill Games in the steeplechase and was on the 1996 US Olympic team. He is now the Communications Manager for the B.A.A. and the Boston Marathon.

Last year, Tim and Helen Christoni ran Boston, flew home to California, got married, then ran the Big Sur Marathon the next weekend. They are back to run Boston again this year.

2015 Boston Marathon Champion Caroline Rotich and her coach, Ryan Bolton who was on the 2000 US Olympic Triathlon team, chatted about Caroline’s victory, training, and plans for this year’s race.

Amby Burfoot won the Boston Marathon in 1968, and is still as passionate about running as ever. Great chat!

The Commissioner of USA Today Sports Active Alliance, Bruce Revman chatted with us about their recently launched 16 event marathon tour, and shared his insight on trends in the marketing of running.

Haven lost both legs below the knee in a bomb blast as an infant in Vietnam. What she has achieved since is amazing. She is now 13 years old and her goal is to go to the 2020 Paralympics as a swimmer.
For more on Haven’s remarkable story, check out her Challenged Athletes Foundation profile here.

Author Matt Fitzgerald talked with us about his latest book: How Bad Do You Want It, about the mental aspects of achieving greatness in sports.

1995 Ironman Triathlon World Champion Karen Smyers, and her husband Mike King stopped by for a chat. We talked about Karen’s greatest races, and about Mike’s recent documentary on Roger Bannister breaking the 4 minute mile.

When you come to Boston, having a chat with the legendary Dick Hoyt is a must!

Mike Wardian has set a world record running a marathon as Spiderman, is a four-time USATF Ultrarunner of the Year, has run two marathons in two cities on the same day, and this year he’ll be running all of the World Major Marathons.

Laurel Wassner is the first cancer survivor to not only become a professional triathlete, but to also win an Iron-distance race. Boston will be her first-ever marathon that didn’t come after a swim and a bike ride.

Who else is planning to run the Boston Marathon in reverse to the starting line in Hopkinton tomorrow morning, and then run the race? If you are Dean Karnazes, that’s just how you roll!

This was our first-ever conversation with the three-time Boston Marathon champion. What an amazing woman! 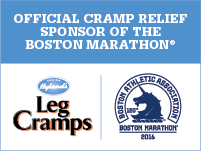