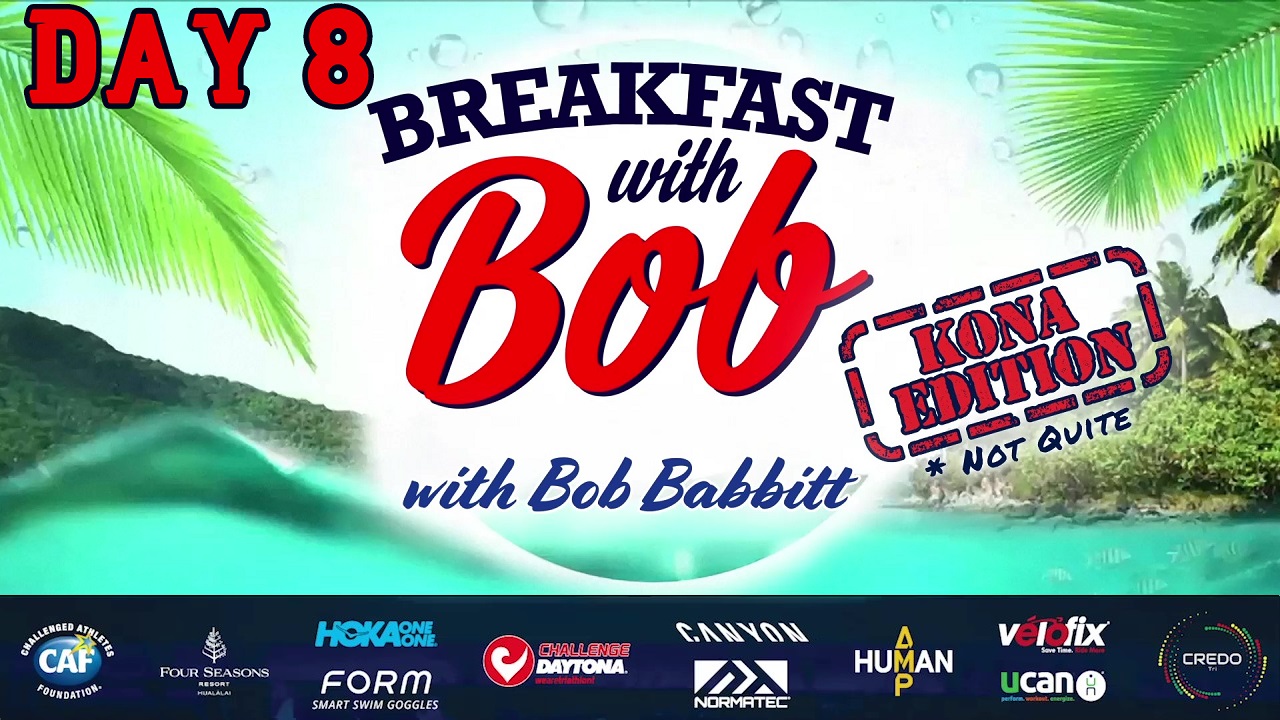 We can’t all be together in Kona this year for Ironman Week, but we can still bring you Breakfast with Bob Kona Edition, just virtually this year. Enjoy the interviews for Day 8.

Ben Hoffman has been working with renowned coach Ryan Bolton for a number of years and the results of that training really came to light in 2019. Ben had the second fastest marathon of the day at the 2019 Ironman World Championship and finished fourth and, three weeks later, he took second to Joe Skipper at Ironman Florida with a 7 : 48 : 29, the fastest Ironman time for an American ever while running the fastest Ironman marathon for an American ever, 2 : 36 : 09. Ben and his one year old daughter Josie joined us for a really fun conversation!

He is the main man at Purple Patch Fitness and one of the few coaches on the planet whose client list includes the biggest names in triathlon as well as the biggest names in business. On November 13, 14 and 15, Coach Matt Dixon and his team of experts – including six-time Ironman World Champion Mark Allen – will be hosting a virtual camp to help all of us develop the best habits for a 2021 performance reset. Check out: performancereset2020.com

In his last triathlon before he retired, Jesse Thomas went sub-eight hours at the 2018 Challenge Roth while also running sub-2 : 45 and finishing third. Who else’s last race before they retired was a bucket list sub-eight? Not a bad way for the former Stanford steeplechase star, six-time Wildflower champion, and two-time Ironman champion to go out after an awesome ten year career!

If you are a movie buff, you know Sean Astin from his roles in Rudy, Lord of the Rings, and Goonies. In this interview, Sean talks about running marathons in LA and Boston, and how impactful it was for him to finish the 2015 Ironman World Championship. I loved it when he took his camera and gave us a tour of his workout room. What a treat!

The date was March 22, 2016 and the location was the Brussels Airport. 6’9” 250 pound former European pro basketball player Sebastien Bellin found himself lying on the ground in a pool of blood not able to move, his body shattered by two explosions. Miraculously, he is now an Ironman hopeful.

I was thinking the other day about great comebacks in Ironman history. Kathleen McCartney’s comeback in February 1982 to catch Julie Moss right before the finish on Ali’i Drive, Dave Scott running down Mark Allen in 1984, Mirinda Carfrae catching Daniela Ryf in 2014, and Mark Allen running down Thomas Hellriegel in 1995 are a few that come to mind. But did you realize that after coming up short to Mark Allen in 1989, Dave Scott didn’t get back to the start line in Kona until 1994 and when he did he finished second after five years away? Now that’s a comeback!!