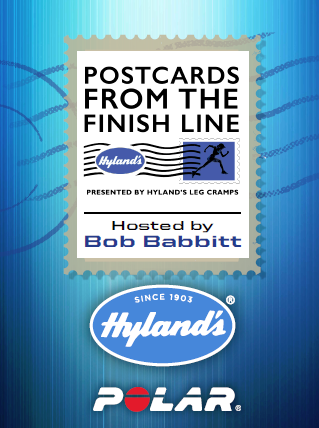 2015 Boston Marathon champion Caroline Rotich and her coach, Olympic triathlete Ryan Bolton talked about Caroline’s road back to the starting line after dealing with injury. Ryan discussed the importance of patience in recovering from an injury, and shared how they used cross training, including mountain biking, during Caroline’s recovery. Ryan talked about what he has learned working with elite runners, and the differences between American and East African runners. One difference: easy runs are easy runs. Caroline runs 10-minute miles for her easy runs. Ryan also shared that Carolina is a world class sleeper. The importance of going easy and recovery as a key to performance cannot be overstated. Ryan describes a typical training week for the champion, and talks about their motto: harambee: as a group, we achieve more.

We kicked off our Postcards from Boston interviews with ultra-runner extraordinaire: Mike Wardian! Besides running marathons on every continent, Mike also holds the title of World’s Fastest Elvis: winning the Rock n Roll Las Vegas Marathon dressed as Elvis. Mike’s love for all things running is fantastic!

This will be Boston Marathon race director Dave McGillivray’s 45th consecutive time running the Boston Marathon. Now that Dave is race director, he waits until the final finisher, and then heads back out to Hopkinton to run the course at night. For this obvious fan of endurance sports, we chatted about one of Dave’s earliest endurance events, as one of the 108 Ironman Hawaii competitors on Oahu in 1980. Dave talked about how the Boston Marathon has stayed the same over the years, as well as how it has changed; including everything they went through after 2013, which in many ways felt like starting from scratch.

The 2004 Olympic marathon bronze medalist and American running legend stopped by for a chat.

Molly Huddle, just ran the BAA 5K here in Boston this morning (14:56!), and then stopped by for a chat. Molly, a ten time All-American at Notre Dame University, won both the 5,000 and 10,000 at the 2016 U.S. Olympic trials and made the finals of the 10,000 at the 2016 Olympic games and broke the American record with a 30:13:17! We talked about her Olympic experiences in London and Rio. Molly confessed that she caught the marathon bug after running the New York City marathon, and talked about how she will turn her focus to the marathon after next year, and would love to run the marathon in the 2020 Olympics.

Will Leer grew up in Minnesota and only ran track to stay in shape for soccer. Will got a fourth place in 2008 at the Olympic trials at 1500 meters, and ran a 3:51.82 mile in Dublin.

Dean Karnazes is one of the busiest runners around. His upcoming marathon schedule is unbelievable! Dean paused briefly from running to sit down for chat. Dean talked with us about his latest book, The Road to Sparta, and what he learned about Greece and how running impacted the world. Dean’s energy is off the charts, and I always love chatting with him! Love his story of trying to run a marathon eating just figs! And how about when Dean ran for 48 hours on a treadmill above Times Square!

Amby Burfoot, took up marathon in high school, and was a collegiate teammate and roommate with Bill Rodgers. Amby won Boston in 1968, which was a very special day for him, when everything felt effortless. We talked about that memorable day, and what it feels like to run down Boylston Street in first place. Amby started working at Runner’s World in 1978, and we talked about what it’s been like to have been there in the formative years of running, and watch the sport and the magazine grow over the years.

Along with discussing the use of multisport training to help your running, we chatted a bit with author Matt Fitzgerald about triathlon’s IronWar and what made Dave Scott and Mark Allen tick. We also talked about Matt’s latest book: The Endurance Diet, and the role nutrition plays in endurance fitness and performance.

Pam Nisevech-Bede, an elite age group athlete and nutrition expert, chatted about the importance of nutrition for endurance sports athletes. Pam discussed the ketogenic diet and the role of carbohydrates in athletic performance. We also talked about her recommendations for race day nutrition. Pam recently spent time at one of Dave Scott’s Triathlon Training Camps and shared some of the tips and insights she got from the experience.

Olympian Courtney Thompson and Mike Ehredt are united through running and their commitment to honoring soldiers and the sacrifices they have made for our country. Mike told us about his Project America Run program of running across the nation, planting flags across the way in the memory of fallen soldiers. He has run over 6,000 miles and planted over 6,000 flags. Now Mike is coaching Courtney, an Olympic volleyball player, to run the Boston Marathon.

Documentarian Jon Dunham talked about the making of his film, Boston: The Documentary, which debuted last night in Boston. Jon discussed the stories he spotlighted in the film, and what it is about the marathon and its participants that makes it so special. One of his biggest challenges? How to tell 118 years of marathon history in 2 hours?

Watch our Postcards from Boston interviews with seven incredible women making a difference in the world through running: Boston Marathon Wonder Women