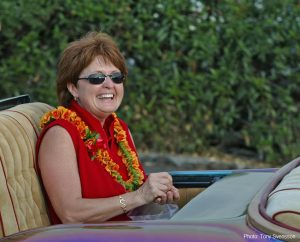 As you may or may not know, Sharron has been bravely battling pancreatic cancer for the past year. Joe and Sharron have been very private about her illness; they wanted it that way.

She and Joe moved back to Kona this past year, fulfilling their dream since leaving approximately 8 years ago.  Sharron fully expected that she would recover and continue living life with a “new normal” as she called it, knowing there would be some necessary life changes after her cancer. After a series of surgeries and chemo therapy, a new experimental treatment was being tried and Sharron and Joe were optimistic that she would continue to recover.

Unfortunately, Joe called me on Wednesday to let me know that Sharron has suffered several set-backs over the last week including a series of strokes that have left her in an irreversible coma.  In accordance with Sharron’s wishes, she is receiving only comfort care. Joe and their family remain with her at Queens Medical Center in Honolulu.

Sharron has handled the whole ordeal with strength and grace beyond what I think many could. She lived as normal a life as she possibly could and most who saw her did not realize how ill she was.

Sharron would want us to remember her as healthy and happy, and perhaps that is why she did not let many know of her illness. Let’s remember her that way with that sparkle in her eyes and smile on her face. She graced our lives and for that we can be truly grateful.

Joe would like to have a memorial celebration of Sharron’s life and has asked me to help in the arrangements.   We are setting up a Memorial Website and I have attached a link here.  This should be up some time tomorrow or Monday, at: sharron-ackles.forevermissed.  We will post an update on the website as well as details of the Memorial when they are available.  In the meantime, you may upload pictures, videos, testimonials, messages, tributes, etc. on the website for the Ackles family.

Please keep them all in your thoughts and prayers,