It’s funny how things turn out. Throughout the 1980s, to win the Ironman World Championship, you had to dethrone the Lord of the Lava, the one and only Dave Scott. After Mark Allen finally defeated his long-time rival in 1989, in the classic IronWar battle, he came back to win five more titles, but each time the person who finished in second place was different.

In 1990 it was two-time Ironman World Champion Scott Tinley. In 1991 it was Aussie Greg Welch. In 1992 it was Cristian Bustos from Chile. In 1993 it was Pauli Kiuru of Finland. And in 1995, in Mark Allen’s last-ever race, it was Germany’s Thomas Hellriegel.

This feature, The Grip 6, showcases the articles I wrote after each of those races. I hope you enjoy this trip back in time!

Mark Allen came to Kona six times trying to win the Ironman and to beat Dave Scott and each time he came up empty. On his seventh try, it finally happened. Read here: 1989: IronWar

Check out our featured interview for 1989:

In 1990, Mark Allen geared his whole season around defending the Ironman title and even skipped the World Triathlon Championships in Orlando, Florida, on September 15 to maintain his long-distance focus. There was little doubt going in that the race was his to win… or lose. Could he win it without Dave Scott as his tour guide? Every time he left Dave in the past, he blew up. “Once you blow up over there, you never forget it,” Todd Jacobs said solemnly. Read here: 1990: The Equalizer

Check out our featured interview for 1990:

The Big Four: Dave Scott, Mark Allen, Scott Molina and Scott Tinley were showcased on the cover of Competitor Magazine back in 1987 as The Big 4. Here is a rare interview I was able to do in 2012 with four of the greatest triathletes of all time. Watch here.

In the game of Ironman chess, sometimes the moves are so subtle no one seems to notice. But they’re there. Letting Greg Welch dictate the pace on the bike took that responsibility off Mark Allen’s shoulders. It also put his most dangerous competitor right where he wanted him most: smack dab in his sights. No worries like “Where is that guy?” or “How far back is he?” Allen played the waiting game to perfection. He waited on the bike. He caught Welch in the run but waited to make his final move until he knew the crowd would not be a factor, when his adversary’s only companions would be self-doubt and the stark nakedness of the lava fields surrounding him. Read here: 1991: Checkmate

Check out our featured interview for 1991:

Greg Welch won the 1994 Ironman World Championship, finished second in 1991, and took third in both 1989 and 1996. But his 11th place finish in 1999, despite the fact that he was having major heart Issues throughout the day, is simply unbelievable. Watch here.

When doubt creeps into the sub-conscious, fatigue and failure are usually waiting at the door, bags nearby, planning to stay for the night. And after six hours of hand-to-hand combat in the lava fields, three-time defending Ironman champion Mark Allen was about to succumb…Read here: 1992 Con Mucho Bustos

Check out our featured interview for 1992:

Mark Allen on his 1990 – 1993 Ironman Victories: While we have chatted a bunch over the years about Mark’s first win in Kona in 1989’s Iron War over Dave Scott and his sixth and final win in 1995, where he caught Thomas Hellriegel in the last few miles, this time our focus was his four other Ironman victories between 1990 and 1993. Listen here.

“To win the Ironman,” says Wolfgang Dittrich, “you have to have physical and mental strength. And everyone has physical strength.”

To dig really deep. To overcome the pain and the self-doubt. To absorb the punishment. To be the target five times in a row and emerge victorious, Mark Allen is as tough as they come. 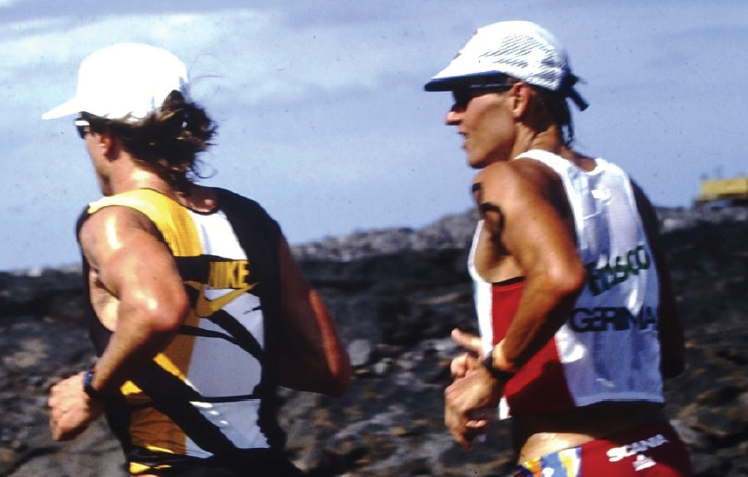 13:31. That’s how big a lead Thomas Hellriegel had on the chase pack off the bike. Someone in that group would have to outrun him by 30 seconds per mile to win the race. If Hellriegel could piece together a three-hour marathon, Greg Welch, Mark Allen, or Rainer Mueller would have to run sub-2:47 to win.

The lead was 4:10 at mile 16. ‘I had to have absolute trust in my power and my ability to just continue to stay on the pace,” insists Allen. “I could never once have an ounce of doubt about what I was doing out there.”

Check out our featured interview for 1995: Thomas Hellriegel on Breakfast with Bob. Watch here. 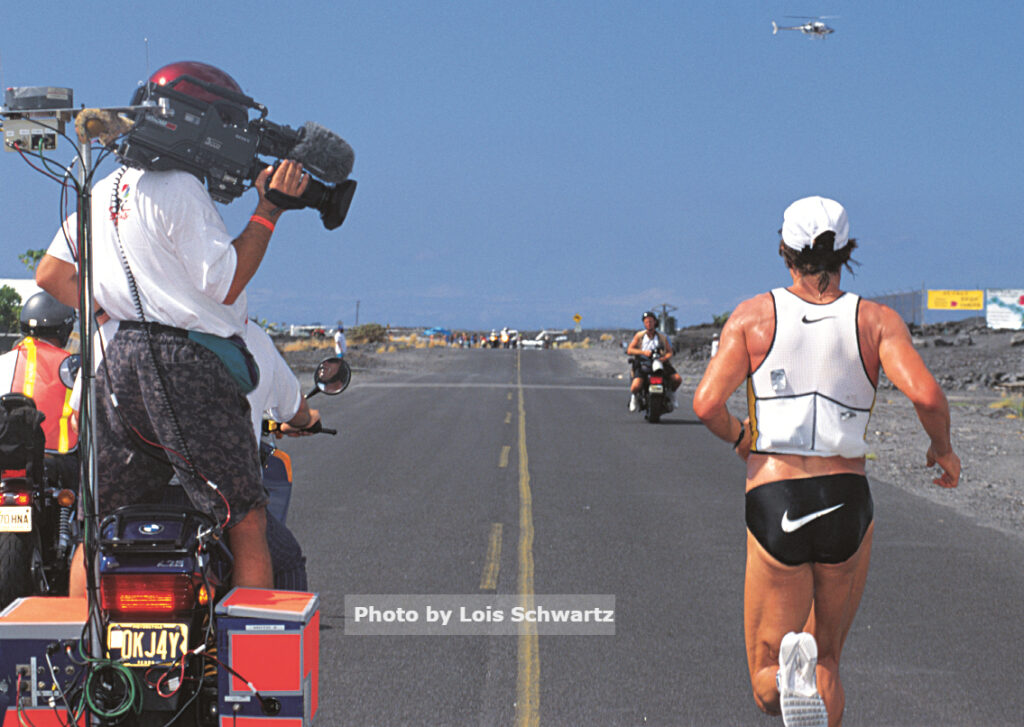