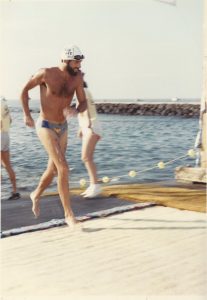 The year was 1986, and for some reason I felt it was important to focus on my swimming for that year’s Ironman. I swam pretty much every single day that summer and ended up having my best swim ever in Kona, something in the 1:02 range.

Great. So I took a few minutes off my swim, stopped to take a pee after the swim, and came out of transition in basically the same spot I normally came out in.

I might have lost a little time in transition strapping on my Winnebago-sized fanny pack that is obviously very aerodynamic as well. It was about the same size as Rodney Dangerfield’s golf bag in Caddyshack. I always was of the mindset that it’s always better to carry a little too much than to be needing something during the ride.

Inside my monstrosity I had six peanut butter and guava jelly sandwiches – YUM! – a few spare tubes and tires plus tire levers, vice grips, a wrench set, a spare chain plus a few dollars in case I broke down and needed to take a taxi back to town.

To be honest, I don’t remember if we had special needs bags back then, but I was pretty much prepared for any special need that might arise.

There’s a story behind my cool Cannondale bike, which was actually fairly new to me…..

I had participated in a Ride and Tie with two runners and a horse a few years earlier east of San Diego. Two runners take turns riding a horse and running over a 28 mile off-road course. Think of it as playing leapfrog with a buddy. It’s a great concept except for the part about sitting on top of a 3,000-pound four-legged eating and crapping machine that can kill you. 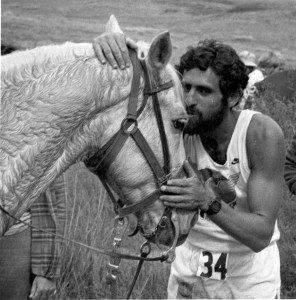 I had never ridden a horse before the race and, when they started the event with a shotgun blast, our mellow horse named Shasta decided to change his name to Lightning. After running the first four miles while my teammate rode the horse, I came upon Lightning tied to a tree and pawing the sky with his hooves. I somehow levered my way into the saddle and held on for dear life as Lightning became Carl Lewis and long-jumped his way through the entire field.

For the first 20 miles, I ran 16 and rode only four. I figured by the time I mounted our steed at that last check point, he’d be tired and we could trot in the last eight miles without too much damage to the pilot, meaning me.

As I came into the mile 20 checkpoint, I saw Shasta being loaded into one of those little horsey garages that attaches to the back of your pick-up truck.

Them: His hooves are sore.

Them: Well, you better get going. You’ve still got eight miles left.

As I trotted those last eight miles I had a discussion with myself.

Me: I like this concept of two people taking turns riding and running

Me: Yeah, but there’s one major flaw:  we’ve got to lose the horse.

So when I came back from my horse riding adventure, I created the Lubricated Ride and Tie using road bikes. It was a 20 mile course -no permits, no road closures, no permission – with two people taking turns running and riding a road bike. We started at Mission Bay in San Diego and included a stop at the pool at the Torrey Pines Resort for a quick quarter mile swim, hence the lubricated part of the event.

So imagine this. Couples in their 60’s sitting in lounge chairs by the resort pool as guys in Speedos come barreling up on road bikes at about 30 miles an hour, skid to a stop, toss their bikes to the side, dive into the pool and swim around and over Miss Bertha in her flowered swim cap while creating a veritable tsunami around her. They’d hop out and start running and a few minutes later Mr. Speedo’s teammate would repeat the drill, repeat Miss Bertha’s aquatic nightmare, and take off on the bike.

Now most people were smart enough to carry a chain and lock with them since they would be leaving their bike along a busy road by itself before running off.  But being the trusting soul that I am, I didn’t need no stinkin’ lock, and when my teammate, 1979 Ironman champion Tom Warren, left my bike somewhere near Mission Bay High School toward the end of the race, I never saw it and ran my way to the finish. Needless to say, someone spotted this nice bike minding its own business leaning against a light pole and decided to take it home.

Hence a group of friends got together to buy me the freckled Cannondale that’s in the picture.

On a side-note, having my bike ripped off led me to move the ride and tie events to a secret off-road location so that we could use mountain bikes and not have to worry about them being ‘lost or borrowed’ during the event. Eventually the ride and tie events became the Muddy Buddy Ride and Run Series that at one point had over 18 events around the country and attracted up to 4,000 participants per event.

But I digress…. back to Kona….

When I dismounted my newly-acquired Cannondale after 112 miles, my back was a tad sore from hauling that huge fanny pack and I ended up walking a major chunk of the marathon.

During the marathon, I connected with two other folks who, like me, were simply trying to make it through the day. We ended up on the Queen K Highway breaking the marathon into short bites by running to a telephone pole and walking to the next one. We ran a pole and walked a pole all the way back to town. We stayed together and bowed to the crowd at the finish.

Yeah, I was slow. Yeah, I might have been able to get by without the huge pack strapped around my waist. Yeah, I wasted a lot of energy swimming so much that summer to gain absolutely no time.

But at the end of the day, we made it to the most important finish line in sport and I made two new friends along the way.

What could be better than that? 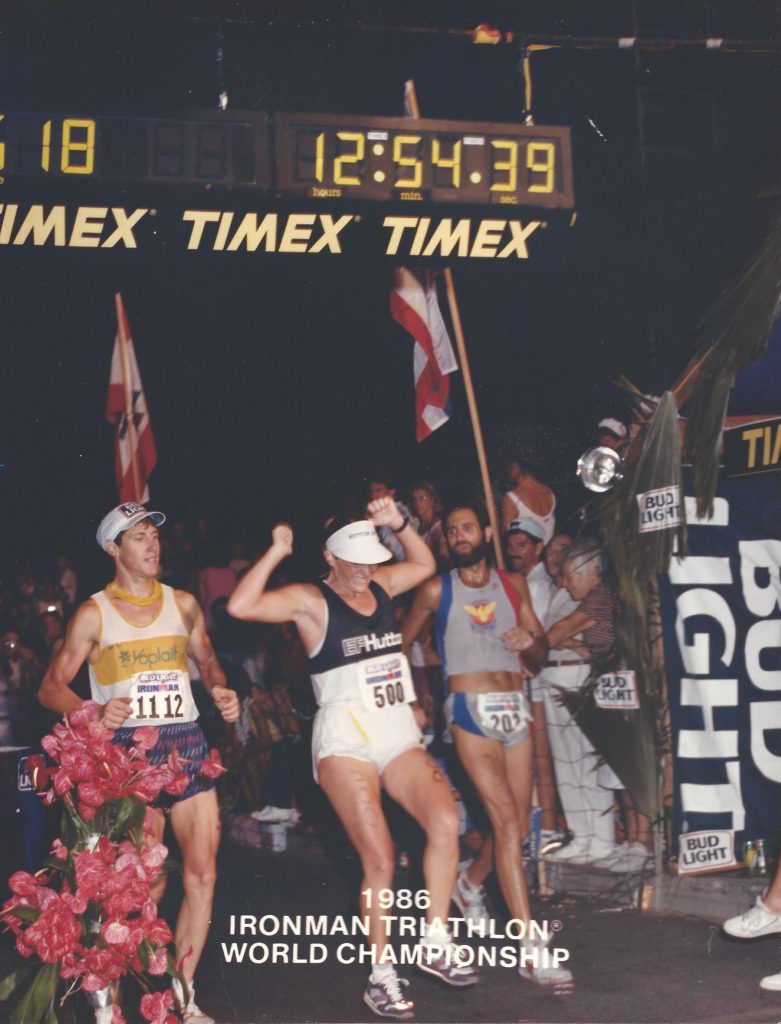 Todd Jacobs finished eighth in Kona in 1987 and 1988. He is also one of my favorite people to interview ever. In this conversation we cover Scott Tinley, Mark Allen, and Dave Scott, plus the three year Ironman battle between wheelchair legends David Bailey and Carlos Moleda. LISTEN here.