2014 was a very special year in the wonderful world of endurance sports. When I look back at the year that was, there are three moments – and people – that stick out more than the others.

John Maclean at the E Komo Mai Banquet at the Ironman World Championship in October. Photo courtesy of Lee Gruenfeld

[dropcap style=”round”]1[/dropcap]  At the very top of my list is Australian John Maclean who was the first paralyzed athlete to complete the Ironman World Championship using a handcycle and a racing chair back in 1997. This year he actually got out of his wheelchair and, in October, completed the Nepean Triathlon – swimming, cycling, and walking the 5K, 26 years after he was paralyzed while training for that same event. It was a miracle and I’m still moved every time I watch John pick up his son or walk on the beach with his wife.

Check out our conversation with John HERE from Breakfast from Kona.

Listen to the interview HERE on Babbittville Radio. 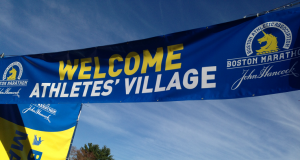 [dropcap style=”round”]2[/dropcap]  No American had won the Boston Marathon since Greg Meyer did it back in 1983. On top of that, the marathon was only one year removed from the tragic bombings that made the marathon a news story rather than a sports story in 2013. What could be better than an American winning the marathon in 2014? And not just any American, but Meb Keflezighi, a young man from Eritrea who came to the U.S. at the age of 12 with his ten brothers and sisters and couldn’t speak a word of English when he arrived. Meb and his family are the American Dream personified, and when he broke away and surprised the world with his victory in Boston in honor of the four people who died in the explosion – he had their names written on his race number – it became the endurance sports story of the year. 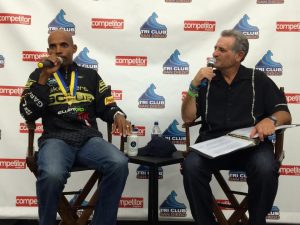 Check out our Q&A with Meb HERE from a live appearance with the Tri Club of San Diego.

[dropcap style=”round”]3[/dropcap]  When Mirinda Carfrae, the two-time Ironman World Champion, came off the bike in eighth place and more than 14 minutes behind the leader, Ironman 70.3 World Champion Daniela Ryf of Switzerland, the odds of Rinny winning her third title in Kona were somewhere between slim, none, and non-existent. But the Ironman world has learned over time to never count out the very best runner in her sport. Rinny broke her own run course record and won her third Ironman World Championship title in a memorable come-from-behind win.

There are only a few Ironman World Championship races that have featured epic come-from-behind wins. First, in February of 1982, Kathleen McCartney caught and passed Julie Moss a few feet from the finish on Ali’i Drive, overcoming a double-digit margin along the way. In 1984 Dave Scott ran down Mark Allen after Allen had built up a 12 minute lead. Then Mark Allen came off the bike in 1995 over 12 minutes down to Germany’s Thomas Hellriegel in what Allen had already announced would be his last trip to the Ironman. He made up over 30 seconds a mile to win his sixth and final title. Also in 1995, Paula Newby–Fraser, the unquestioned Queen of Kona with seven Ironman World Championship titles on her resume, was within a half mile of her eighth title when the wheels came off. She collapsed, and Karen Smyers went running by to win her first and only Ironman World Championship title, after being down 11 minutes off the bike. In 2011, Chrissie Wellington, ten days after a bike crash that should have put her out of the race, finished her career in style by making up a double-digit deficit and won her fourth Ironman World Championship title.

And then came Rinny, who on October 11, 2014, joined a very elite group when she not only won her third title, but did it in legendary fashion.

Check out our Breakfast from Kona interview with Mirinda after her huge win:

Listen to the interview HERE on Babbittville Radio.

These were my top three moments in endurance sports in 2014. What were yours?