In honor of Mother’s Day, we shine the spotlight on a few of our of favorite endurance sports moms.

Mom to Piper, Deena is an American running treasure, who continues to impress with her running accomplishments, including breaking the US master’s record for the half marathon in 2014 at 41 years of age (1:11:38). She backed that up by breaking the US master’s record for the marathon in 2015 in Chicago (2:27:47). Deena shares some special memories of the 2004 Olympics, including sharing the joy of medaling with her Mammoth Lakes training buddy Meb Keflezighi.

Dorothy Beal and her mom Lesley Cranshaw talked about what makes Boston so special, and what they appreciate so much about the running community. Lesley is running her 10th Boston on Monday, and for Dorothy it will be her 5th Boston and 33rd marathon, so clearly, these two love running!

After knowing so much about Lionel and his background, we got to meet his incredible mom Becky a few days before running the Boston Marathon, her 5th Boston. It was great to hear Lionel’s story from her perspective. We learned that Becky is quite an athlete herself, an accomplished triathlete, who has finished Ironman Mt Tremblant, and will be racing at the 70.3 Worlds in Chattanooga, along with Lionel. Becky’s ultimate goal? The Ironman World Championships in Hawaii. Lionel told us he is waiting to swim to the coffee boat until his mom qualifies for Kona, and they can swim out together! Before then, Lionel, who qualified in Kona, and his mom, who has a PR of 3:30, will enjoy running the Boston Marathon.

“The best part of the race was crossing that finish line and just crushing the kids in my arms.”

Lisa Hallett is the mother of three, the co-founder of the charity Wear Blue: Run to Remember, and now an 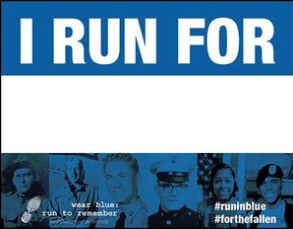 Mom to Be, Gwen Jorgensen 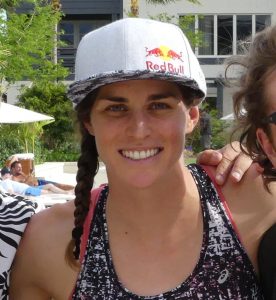 She was finishing up her CPA at the University of Wisconsin and was ready to start her new job at Ernst and Young. But that’s when her life changed forever. During her collegiate days Gwen Jorgensen had been on the swim team for the first few years and then finished by running on the track team. Barb Lindquist, who recruits great runners and swimmers for USA Triathlon approached Gwen in 2010 about giving the sport of triathlon a try. How did things turn out? Gwen Jorgensen is now a two-time Olympian, a two-time ITU World Champion, and the 2016 Olympic Gold Medalist. Gwen takes us through her amazing journey in this exclusive interview! LISTEN HERE 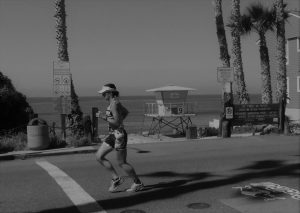 Lount-Pretre is a proud triathlete with some great results on her resume’. The 42 year old had gone 5:07 in Oceanside back in 2004 and has gone 10:57 at Ironman Canada. She was hooked on the sport back in 1997. “My husband was participating in the Pacific Grove Triathlon and while I watched the race I thought ‘I can run faster than those girls.’ I ended up buying a used wetsuit while I was waiting for my husband to finish.”

She jumped in with both feet. Lount-Pretre has completed six Ironman events. “I did one before and after having each one of my three kids,” she laughs.

Ah, yes, the three kids. In Oceanside that fateful morning, daddy was watching the three youngsters, ages 6, 3, and 1, while mommy was off racing. As I stood on the tower, dad was down below with the two oldest in the baby stroller and the youngest on his back…..

Tara raced the 3 day Ultraman World Championships on the Big Island of Hawaii in November, under the watchful eye of her daughter Maya.

Here’s is a short chat with Tara Norton right after she finished the 10K swim and 90 mile bike in 8:39 on Day 1 of the Ultraman. Tara finished 6th overall on Day 1, 2nd woman behind Kate Bevilaqua.

Thanks to all the mom’s out there, holding down the fort, keeping everyone happy, and dominating the world of endurance sports!