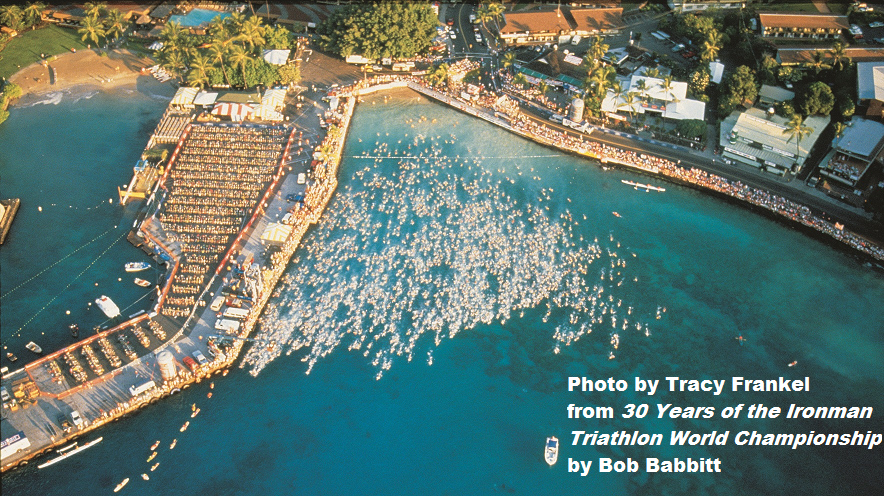 September 4, 2015 –  With the 2015 Ironman Triathlon World Championship a mere 36 days away, we thought it would be fun to countdown to race day with a look back at the 36 athletes who have won the most important race in endurance sports through radio conversations, Breakfast with Bob interviews, plus stories and photography from my 30 Years of the Ironman Triathlon World Championship coffee table book. Check back each day as we countdown to Kona!

[box style=”info”] Review the next 12 World Champions from our Countdown to Kona Part 2. [/box]

Tim DeBoom is the last American to win the Ironman World Championship, which he did in both 2001 and 2002. In 2000, DeBoom lost to friend and training partner Peter Reid by two minutes. Two minutes that fueled DeBoom’s training throughout 2001:

“I lost the Ironman by two lousy minutes. I knew that every time I went out for a ride or a run or a swim for the next 12 months, that two minutes would both haunt me and push me. Two minutes? You’ve got to be kidding.”

In this Babbittville Radio interview, Tim talks about both training with and racing against Peter Reid, running down Chris McCormack at the 2002 race in Kona, and the uncertainty surrounding the 2001 race since it was only a month after the 9/11 tragedy. Listen here. 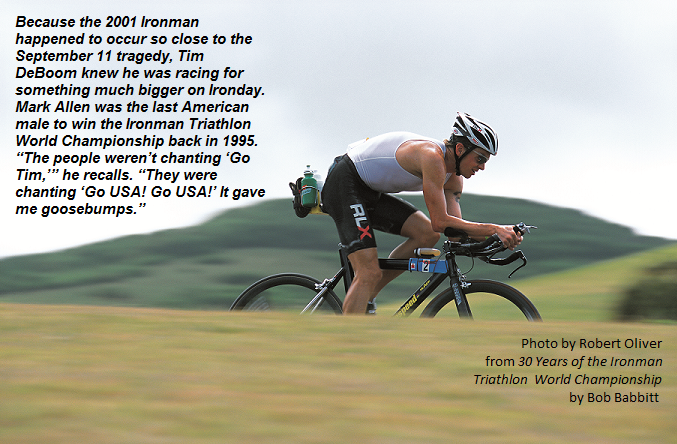 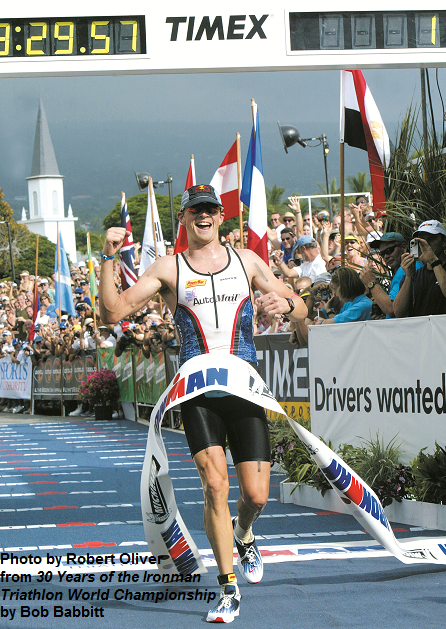 Turning the tables from 2000, Tim DeBoom won his back-to-back title in 2002, with Peter Reid getting second….by three minutes.

Germany’s Normann Stadler won the Ironman Triathlon World Championship in 2004 and again in 2006. 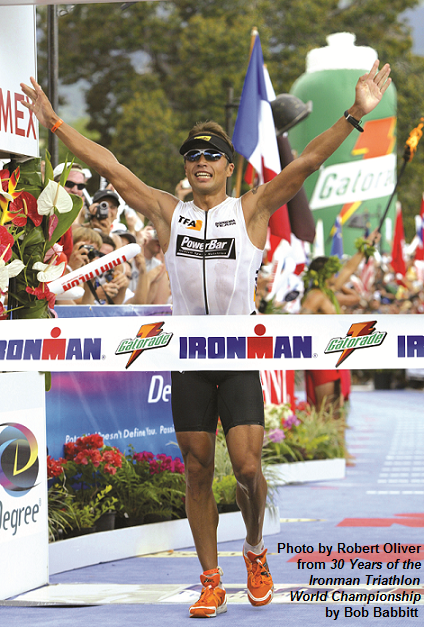 Normann Stadler savoring the win in 2004

From 90 miles to the finish of the ride, the chase pack tends to let up to get ready for the daunting task of running 26.2 miles in middle of the day in sauna-like conditions. Normann Stadler knew that if he pushed that last 20 miles, he could really add to his lead and maybe, just maybe, win the Ironman on the bike.

24:10. When Peter Reid heard that number, he didn’t panic. “When I started the marathon I thought, ‘this is the Ironman, anything can happen..’ He remembered back to 1995 when Mark Allen spotted Germany’s Thomas Hellriegel 13 minutes and ran him down. “ I thought one guy at a time,” says Reid. “And who’s next?”

At mile five a German spectator said to Reid that if he could keep his pace, he could get second. “No,” snapped Reid as he stared him down. “First.”

Reid saw Stadler coming out of the Natural Energy Lab with about six miles to go and still thought he had a chance. “Normann looked good, but not great,” remembers Reid. “If he walked one mile, I’d be right there. I kept fighting the whole way.”

But it was too little, too late.

Years ago another great German cyclist, Jurgen Zack, professed on the Ironman stage that his goal in pushing the pace on the bike was to take the run out of the great runners’ legs.

Six-time champion Mark Allen then took the microphone and countered: “ Jurgen wants to win the bike ride,” Allen said. “My goal is to win the race.

After crossing the Ironman finish line, Normann Stadler broke down in tears of happiness.

Because he had just done both.

–Excerpt from Solitary Confinement by Bob Babbitt, from 30 Years of the Ironman Triathlon World Championship 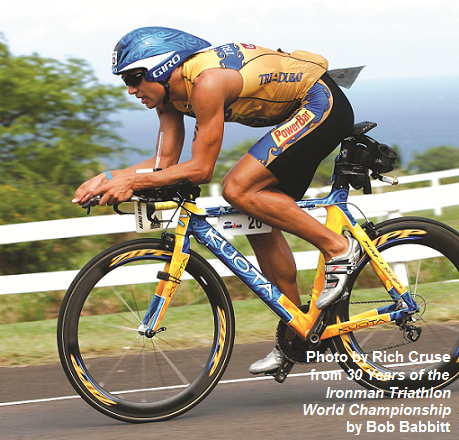 Normann Stadler during his 4:18 ride on his way to his second victory in 2006.

Chris McCormack came to Kona in 2006 knowing that the key to winning was to save his legs during the bike and then run down whoever happened to be in front of him. He came off the bike ten minutes down to the lead and ran a 2:46 marathon.

What he didn’t count on was that Normann Stadler would not only break the course record on the bike (4:18), but also be able to run a 2:55 marathon after that amazing bike ride, to get his second win, by a gap of just 71 seconds to McCormack, and setting up a great rivalry with the Aussie. 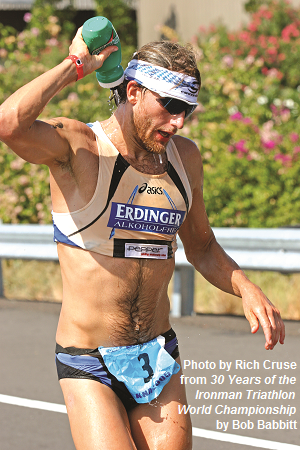 Germany’s Faris Al-Sultan had nine top ten finishes in Kona during his career, including his 2005 Ironman Triathlon World Championship title.

Enjoy this interview with Faris Al-Sultan – the most popular show ever on Babbittville Radio! Listen here.

Faris came on the show and announced his retirement from Ironman racing right after Ironman Texas. 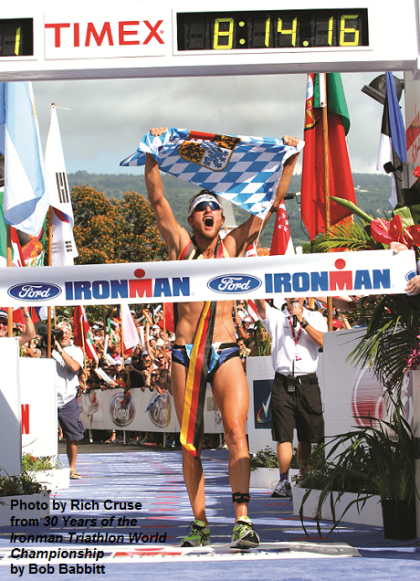 After finishing third the year before, Faris Al-Sultan ran his way to the lead and the win in 2005. 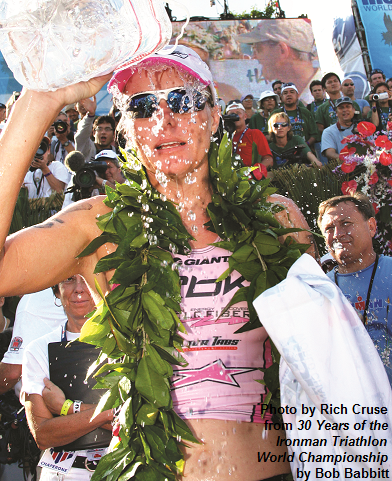 Michellie Jones at the finish in 2005, after running just her second marathon – ever.

The two-time ITU World Champion finished second at her Kona debut in 2005. In 2006, she was able to add a gold medal at the Ironman Triathlon World Championship to the silver medal she took home from the first-ever Olympic Triathlon in her home town of Sydney, Australia in 2000.

In this Babbittville Radio interview, Michellie Jones takes us through her Hall of Fame career. Listen here. 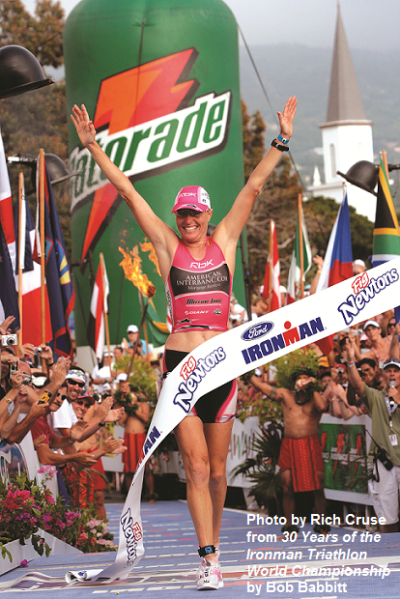 Michellie Jones was inducted into the ITU Hall of Fame in September. We chatted at the induction ceremony in Chicago. She talks about getting into the sport that she loves so much, and why she is still loving the racing and training 15 years to the day after her silver medal in Sydney.

Aussie Chris ‘Macca’ McCormack has two Ironman Triathlon World Championship titles, the first in 2007, and the second in 2010. 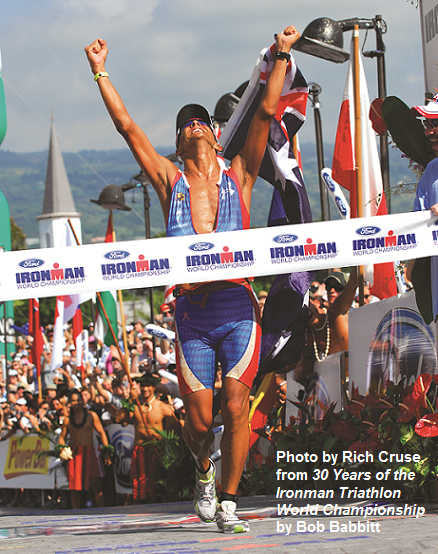 Coming down Palani, I realized that I had finally done it, that I had been dreaming of this for 20 years. It was very personal, almost surreal. I don’t remember faces in the crowd, and the run down Ali’i Drive and crossing the finish line is a blur. It was such a relief after 10 years of hard work. If I had not won this year, it might have crushed me.

After Macca’s second win in 2010, he appeared on the Wheaties box.

In this in-depth conversation with two-time Ironman Triathlon World Champion Chris McCormack, he takes us through his career step by step. Listen here. Macca is always a great interview! Enjoy this Breakfast with Bob chat with the two-time champ before the 2014 race.

Chrissie Wellington has four Ironman Triathlon World Championship titles, including a dominating three in a row. She won the biggest race in the sport in 2007, 2008, 2009, and 2011. 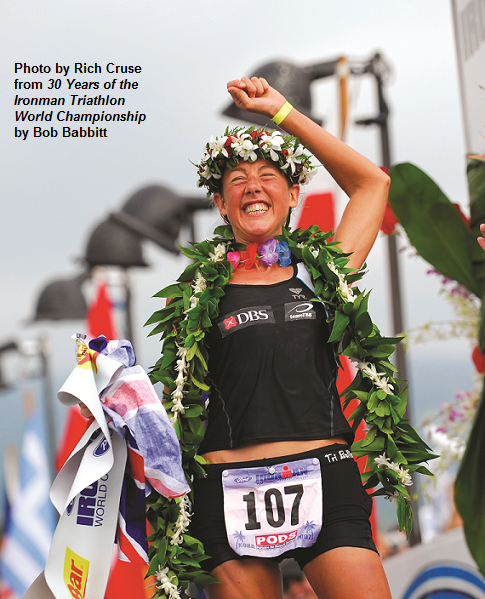 Winning that first Ironman Triathlon World Championship in 2007 was incredibly surreal. I had to pinch myself. It was inconceivable to me and it definitely changed my life forever. 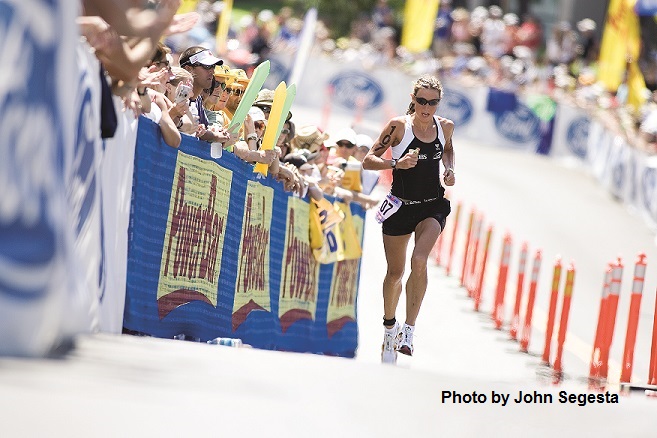 “How deep can I dig? Those were definitely my proudest racing hours. I was the last pro out of the water and came off the bike in sixth. I had to fight tooth and nail and I had never had to do that before. The fight is what I love, the fight is what I crave, and the fight is what I got. Internally and externally I crossed that finish line physically and emotionally annihilated. I knew then that I was complete as an athlete.” 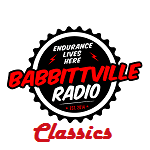 It was one week after what turned out to be the last race – and win – of her amazing career. Chrissie Wellington never lost an Iron distance event, winning 13 times in a row. Her fourth win in Kona at the Ironman World Championship in 2011, coming less than two weeks after a bike crash, was an absolute classic. Listen here.

Aussie Craig ‘Crowie’ Alexander is one of only four men to have won the Ironman Triathlon World Championship three times. The others: Dave Scott, Mark Allen, and Peter Reid. Craig won his first title in 2008, on his second attempt. He backed that up with a second win in 2009. His third title came in 2011. He is the current course record holder. 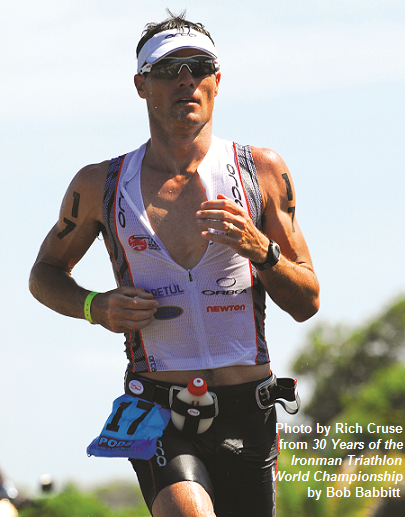 In 2007, Craig Alexander came to Kona with only one Ironman under his belt, but with the 2006 Ironman 70.3 World Championship on his resume. He did his homework well, staying patient during the bike and then turning in a 2:45:13 marathon to finish second to Chris McCormack with a very impressive 8:19:04.

In 2008, Craig put all the puzzle pieces together, and claimed his first Ironman Triathlon World Championship title. I wrote about that victory in The Puzzle.

Enjoy this Babbittville Radio interview with the three-time champion. It’s always a treat to get to chat with Crowie about the most important moments in his legendary career. Listen here.

Here is our Breakfast with Bob from Kona interview with Craig Alexander from 2014:

Mirinda Carfrae is the three-time winner of the Ironman Triathlon World Championship. Like fellow Aussie Craig Alexander, Rinny finished second in her debut in Kona in 2009. She went on to win in 2010, 2013, and 2014.

Her win in 2014 was spectacularly memorable for her amazing run. In this Babbittville Radio interview, she takes us through her race.

It’s one thing to run a fast marathon at the end of an Ironman. But it becomes extra special when you have to run that fast to actually win the race. Mirinda Carfrae was 14:32 back off the bike and in eighth place at the 2014 Ironman World Championship when she uncorked a course record time of 2:50:26 to catch the long-time leader, Daniela Ryf. The gap between the two at the end? A mere 2:02. Listen here.

In this Breakfast with Bob from last October, Mirinda Carfrae talks about defending her title and trying for win number three heading into the 2014 race.

We got a chance to get caught up with Pete in Kona during Ironman Week. Enjoy this Breakfast with Bob interview with the 2012 champ:

We chatted with Pete in August on Babbittville Radio. We talked about his struggles to stay healthy over the past few years, his wide ranging discussions with top marathoner Ryan Hall, and how his training is going right now.  Listen here.

A few weeks after our interview, Pete announced that he would not be racing Kona this year.

Leanda Cave won the Ironman Triathlon World Championship in 2012. In this Breakfast with Bob interview, filmed on Monday October 5th, we talked with Leanda about her gutsy performance in 2012 to get the title, and how she has been on a journey to get back to that place again. Leanda talks about all the hard training she’s been putting in in the heat and humidity of Miami. 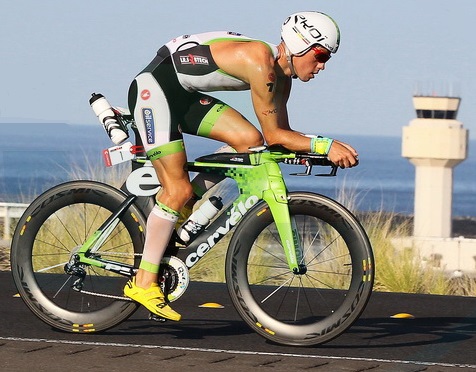 We chatted with Frederik Van Lierde on Babbittville Radio shortly before the 2014 race, as the defending champion was wrapping up his final preparation in 100+ degree heat in Arizona. Listen here.

Sebastian Kienle became the 4th German to win the Ironman Triathlon World Championship when he won in 2014.

We chatted with the defending champion on Babbittville Radio about his career, how winning the Ironman World Championship changed his life, and about another German named Jan Frodeno who just went 7:49 at Ironman Frankfurt. Listen here.

Here is our Breakfast with Bob from Kona interview with Sebastian Kienle, filmed on Monday, October 5th: