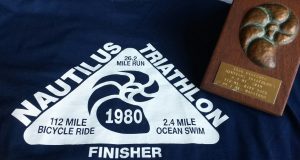 In 1980, the last year before the Ironman moved to the Big Island of Hawaii, 108 of us toed the line at Ala Moana Park. There were no aid stations – you had to supply your own crew – and no roads were blocked off. I remember that each of us was asked to fill out an athletic resume’, which was pretty easy for me since I was a PE teacher at a small private school in San Diego and had no accomplishments whatsoever.  As I paged through the resume’s of the real athletes in the race, there was three-time Olympic cyclist John Howard, and top swimmer Dave Scott. But the one resume’ that stopped me in my tracks, that made me realize I was in WAY over my head, came from a young man from Boston named Dave McGillivray. On Dave’s resume’ he explained how he had run over 3,000 miles across the U.S., going from Medford, Oregon to Medford, Massachusetts. I couldn’t get over the fact that someone could actually get up every morning for I don’t know how many days and just run 50 miles. What type of athletic freaks am I dealing with here? That moment was 36 years ago and I remember it like it was yesterday.

So what is that athletic freak doing today? Well, he happens to be the Race Director of the Boston Marathon and on Monday night [April 18, 2016], after putting on a little event for 30,000 of his closest friends, he went back to the start in Hopkinton and ran his 44th Boston Marathon in a row. 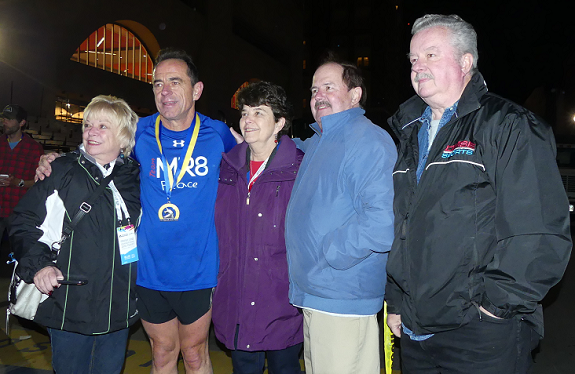 Boston Marathon Race Director, and endurance legend, Dave McGillivray, at the finish line with his family, after running his 44th consecutive Boston Marathon.