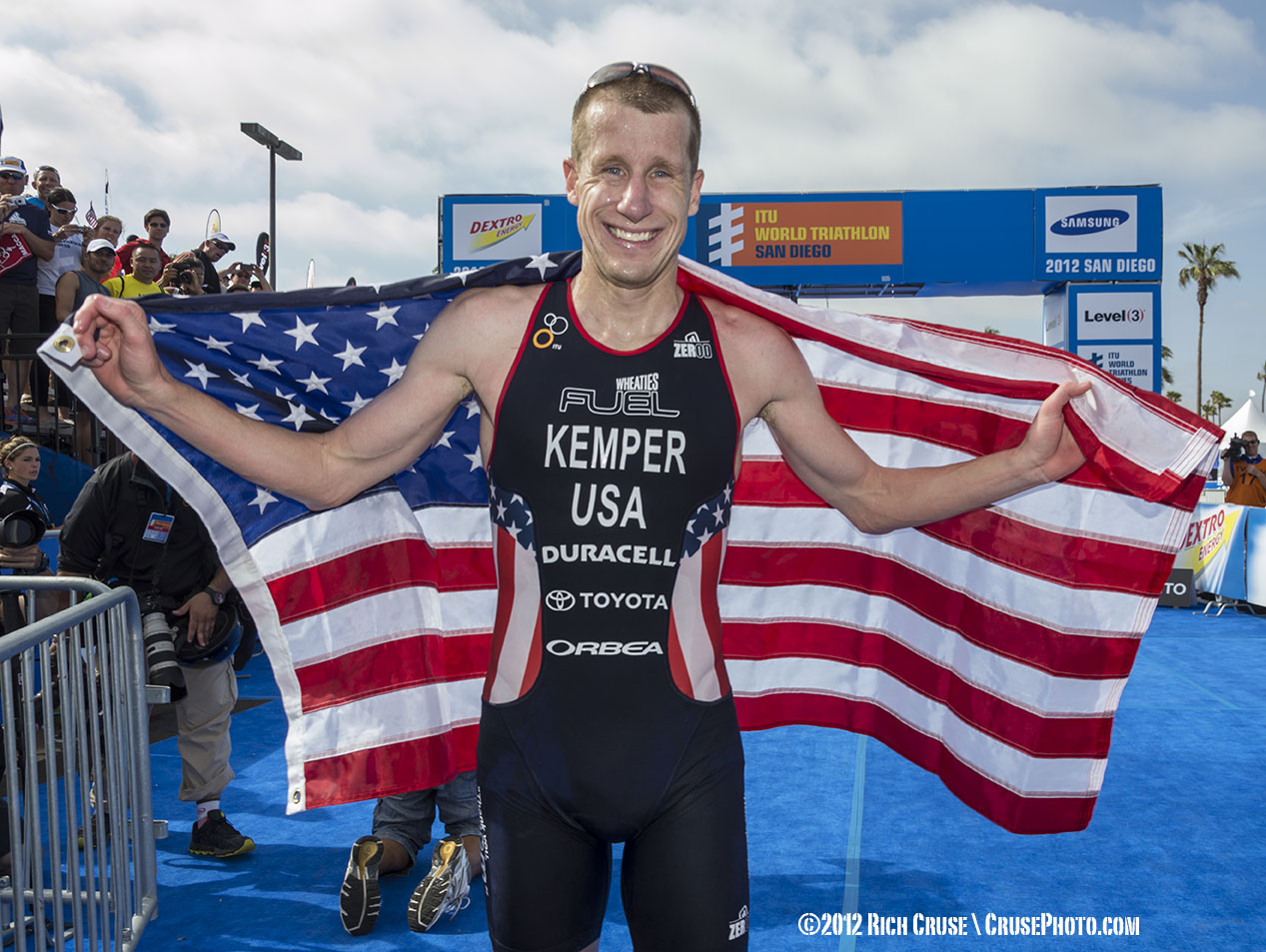 Hunter Kemper: Fuel for the Fire

Editor’s Note: I wrote this piece on Hunter Kemper in 2012, right after his memorable race in San Diego. Hunter went on to finish 14th in London at his 4th Olympics.

It is early January 2011. Three-time U.S. Olympic triathlete Hunter Kemper should be training or helping his wife, Valerie, with their three boys. But instead, he is lying motionless with an intravenous PICC line in his arm and, for the second time that day, he’ll be alone with his thoughts – and doubts – for 90 minutes. That’s three solid hours where he will do nothing but watch an IV filled with antibiotics drip ever-so-slowly into his body.

Not the best way to get ready to make an Olympic team.

35 years old at the time, Kemper was hoping to have one more shot at winning the Olympic medal that had eluded him in 2000, 2004, and 2008. He improved each time, going from 17th in Sydney to 9th in Athens to 7th in Beijing.  But Kemper, who won the IronKids National Championship when he was ten, had been dreaming about an Olympic medal since he was eight.

“I was in a pretty dark place,” remembers Kemper. “I relied a lot on my faith to try and get through those times.  I said to God, ‘Listen, I don’t know my story here, and you do. Can you help me out, because this is not the way I want my career to end.’”

On October 8, 2011, Kemper was racing in Myrtle Beach, South Carolina. He was finishing up the first lap of the bike and was hurtling toward the transition area at over 35 miles per hour. A competitor, who was just getting out of the water, ran into transition and collided with Kemper, leaving him on the ground with a badly shattered left elbow. His first surgery, where a plate was inserted along with 13 screws, came in late October. When a staph infection set in, things quickly went from bad to worse to horrific.

Around Christmas he went to Vail, Colorado and spent five more days in the hospital. Doctors operated on his elbow on three consecutive days. “It was brutal,” says Kemper. “Definitely the hardest thing I’ve ever had to deal with in my career.”

During January and February he couldn’t do a thing and, with the U.S. Olympic Trials coming up in San Diego on Saturday May 12th, the clock was ticking…loudly.

With no American men qualified for London and two spots on the line, everything would be decided in San Diego. Since Kemper had just turned 36 years old, hadn’t raced in seven months and was dealing with a broken elbow, his prospects for making his fourth Olympic team were basically slim and none. Especially since Jarrod Shoemaker, a 2008 U.S. Olympian, Matt Chrabot, and Manny Huerta all seemed to be in great form.

Kemper certainly had enough in the way of disrespect to keep him motivated. He was the last athlete on the elite list and wore number 73 in San Diego. Plus, his name was rarely mentioned by the media as someone who could make the team.

“I felt like I had been written off,” admits Kemper. “My mom asked if I’d seen Inside Triathlon with Jarrod Shoemaker and Matt Chrabot on the cover. I told her I don’t look at the magazines. So she sends me a link to the cover and she starts goading me. ‘You better have this cover with you every time you go for a run. You need to get out there and go hard every day. This is just fuel for the fire.’”

On Mother’s Day weekend, Kemper stepped up big for mom and put together a race for the ages. He was in 15th early in the run, was the third American after 5K, and was still in 12th place after four miles.

With only eight weeks of training, he knew he didn’t have a lot of leg speed. What he had was confidence in his plan to run the second half of the 10K faster than the first, and the patience to stick to his plan.

His run time was 30:27 and he ended up fifth, earning his fourth kick at the Olympic can. His kids, his wife, his in-laws and his parents were all there to watch him shed a few tears as he roared across the line.

“My five year old son, Davis, wondered where daddy’s medal was afterwards,” says Kemper. “He figured I had won the race. I told him that I didn’t win a medal, but we did win a trip to London.”

Which means that Hunter Kemper’s lifelong dream, to win an Olympic medal, is still very much alive. 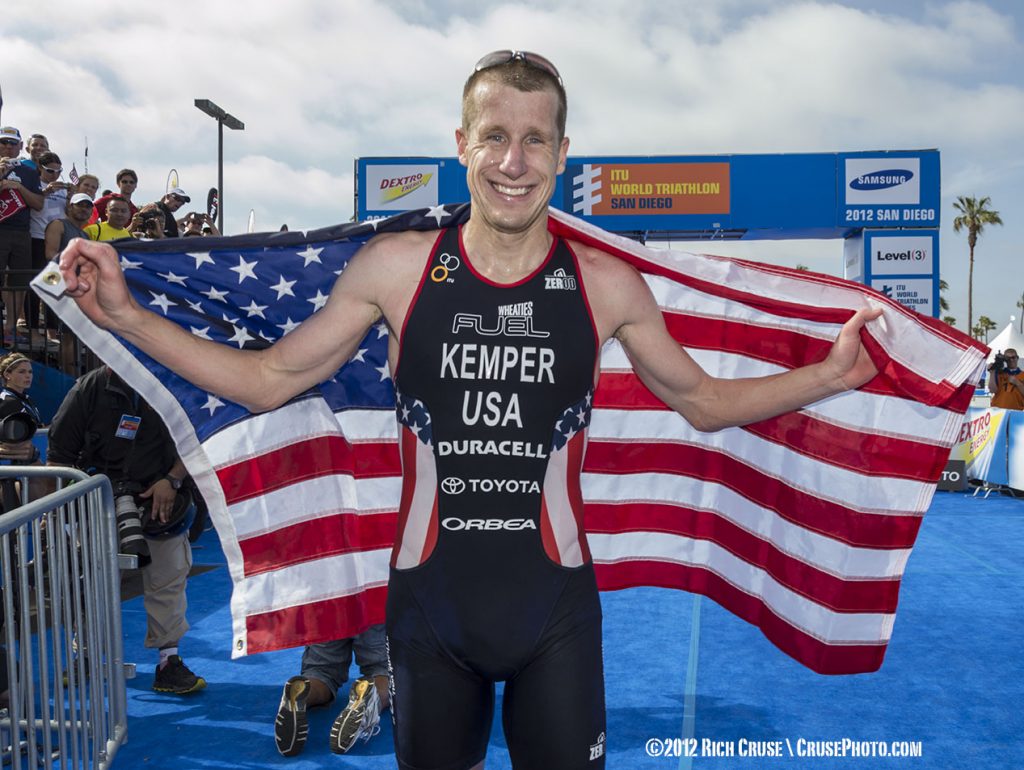 I visited with Hunter in Chicago this last September as he was on a quest for his 5th Olympic team. As things turned out for Hunter, he was not able to make the team for Rio. But he will always be a four-time Olympian. Pretty epic!

My chat with Hunter Kemper, filmed on location in Chicago, at the ITU Grand Final in September:

Hunter Kemper hadn’t raced in eight months when he toed the line in San Diego back in 2012. To make his fourth Olympic team he needed to finish top nine overall that day. When he came off the bike in 32nd place, no one thought he had a shot. A shot? The guy ran his way into fifth, made the team and now he’s looking for a top eight in Chicago to make his fifth Olympic team. One lesson we learned that day in San Diego was to never count Hunter Kemper out!

LISTEN to my Babbittville Radio interview with Hunter Kemper.