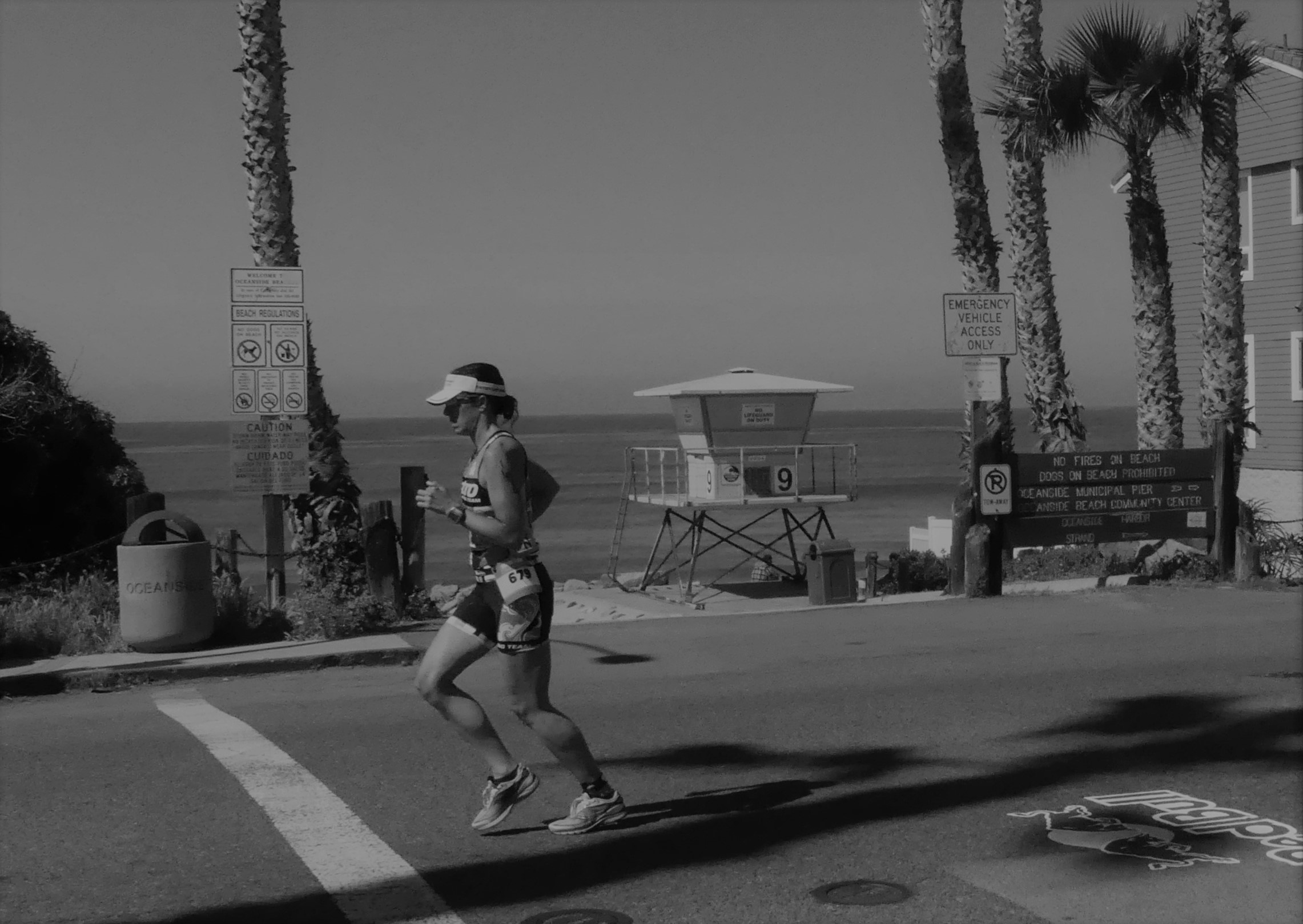 I can tell she is pissed from the way she is walking toward me. Long steps, purposeful steps, I-can’t-believe-I-just-did-that steps. I am doing the announcing up in the tower at what is affectionately called ‘The Hot Corner’ at the Ironman 70.3 in Oceanside, California back in March of 2008. It has gotten that cool ‘The Hot Corner’ label because the participants come out of the 1.2 mile swim, ride a few blocks, and then turn left right below where I am standing.

When the triathletes return from their 56 mile Tour de Camp Pendleton, they will take a right when they get to me and head back to transition. Then it’s time to change once again, this time to running gear, and attempt a two loop out and back 13.1 mile run that comes right by me twice more.

Some people see their family members less often than I will see the 2,000 Iron-hopefuls on this picture perfect Saturday morning.

But this particular woman, who really did not want to be seeing me quite so early in the day, is almost directly underneath the tower and now I can see why she is so upset. Tina Lount-Pretre is from Canada where she ran track – the 1500 and the 3000 – and cross country in high school and college. She completed her engineering degree at Harvard and her masters at Stanford, so the woman obviously has a tad bit going on upstairs. Which might explain why steam is coming out of both ears. Turns out that her back tire was rubbing and she decided to solve that by opening up the rear brakes. While she was riding. “I ran right into the Caution: Bump sign,” she remembers. Not quite the Ivy League thing to do. She went down in a heap, cut open both shoulders and split her front tire into three pieces. Lount-Pretre got to her feet and realized that she was bleeding and that her bike was toast.

So, even though she was two miles into the bike ride, the thought of dropping out never entered her mind. It took her 45 minutes to walk her bike back to where I was. The guys from Race Day Wheels saw what was happening, jumped into action and immediately switched out her wheels since the frame was fine. The medical staff patched her up and it looked like a pit stop out of Talladega Nights.

Lount-Pretre is a proud triathlete with some great results on her resume’. The 42 year old had gone 5:07 in Oceanside back in 2004 and has gone 10:57 at Ironman Canada. She was hooked on the sport back in 1997. “My husband was participating in the Pacific Grove Triathlon and while I watched the race I thought ‘I can run faster than those girls.’ I ended up buying a used wetsuit while I was waiting for my husband to finish.”

She jumped in with both feet. Lount-Pretre has completed six Ironman events. “I did one before and after having each one of my three kids,” she laughs.

Ah, yes, the three kids. In Oceanside that fateful morning, daddy was watching the three youngsters, ages 6, 3, and 1, while mommy was off racing. As I stood on the tower, dad was down below with the two oldest in the baby stroller and the youngest on his back.

As Lount-Pretre brushed away the tears and her personal medical staffed cleaned up her shoulders, I asked her if she wanted to drop out. Hey, you just crashed on your bike and it’s been a traumatic day right? Plus, you’ve lost 45 minutes.

Lount-Pretre took a quick glance at the three pajama clad munchkins and obviously didn’t think much of the idea.

“This is MY day,” she told me. “I’ve got three kids and there is no way I’m giving up six hours of all-by-myself time just because I had a little crash.”

With that, she mounted her steed and rode off in pursuit of the field. For the first ten miles she saw absolutely nobody. But then the pack suddenly appeared and she rode and ran her way back to the masses. Even with the crash, her time was an impressive 6:14:26.

People have all different reasons for toeing the line on race day. For some it’s to win a medal or prove something to themselves or someone else. But for so many, a marathon or a triathlon is the ultimate therapy. No phones, no e-mails, no bosses, no conflicts, no issues, and no kids.

It’s just you hanging out with you for as long as you’d like.

Is there anything better than that?