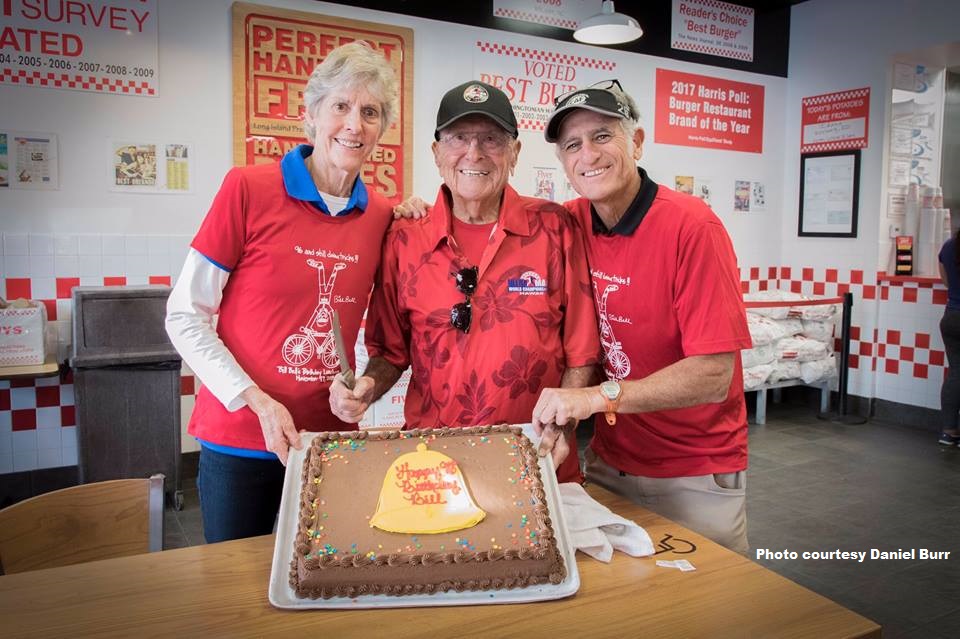 Taking a look back at the legendary Bill Bill. I wrote National Treasure for the May, 2012 issue of Triathlete Magazine, when Bill was nearing 90…..

Bill Bell was in his late 70’s and was the picture of health as he strolled on to the Conan O’Brien set a little over ten years ago. His walk on music, of course, was Black Sabbath’s Ironman since he had won the 70-74 year old division four times and the 75-79 once on The Big Island of Hawaii.  O’Brien was fascinated with the fact that a man nearing 80 was still out there swimming, biking and running ridiculous distances.

“Well, there are women at these races that look like all women want to look,” Bell said, “and then, when you’re done, they always have a beer garden……..”

When the crowd erupted in applause and laughter, Bill Bell knew that his work was done, that all that was left for him to do was to flash his always-at-the-ready smile and give the audience a huge thumbs up.

I was with Bill Bell at the Desert Triathlon out near Palm Springs, CA. in early March and, even when he was riding or running, he was giving everyone who came near him that same big smile and that same huge thumbs up.

Back when he was in his 50’s, Bell went for a physical and rode a stationary bike for 20 minutes while his heart was monitored. Every fourth beat there was a hiccup of some sort on the EKG machine. “I thought there was a loose connection on the machine,” recalls Bell.

The doctor thought otherwise and sent Bell off to see Dr. Ben Rosen, the head of cardiology at USC. “Dr. Rosen told me that he would like me to jog 40 minutes three times a week,” says Bell. “I was working all kinds of hours, but I loved the running.  I called the doctor and asked if I could do more, if I could start running every day.”

His first Ironman came in 1982. Since then he has completed 300 triathlons, 32 Ironman events, 33 half Ironman events plus 158 marathons and ultramarathons.

Today on our #KonaCountdown: The ageless Ironman legend Bill Bell. Bill didn’t get into endurance sports until he was over 50, but he certainly made up for lost time. He completed over 300 triathlons, 32 Ironman races and 158 marathons in his career. He finished his final Kona when he was 76 in 2001 and his final Ironman at Ironman California when he was 78. He won his division in Kona five times. In this sound bite, Bill reminds us: Never Look Back. Listen to the full interview with Bill here: ▶️ www.babbittville.com/babbittville-radio/bill-bell/ 📷 Robert Oliver, from my 30 Years of the Ironman Triathlon World Championship coffee table book . #babbittville #IMKona

Not long into his racing career, Bell started having issues with race directors. When he began racing, the oldest division was 65 and up. When Bell turned 70, he asked race directors to create a 70-74 division. The answer?  No way. There would never be enough 70 year olds racing to make it worthwhile. It’s tough for a 72 year old to compete with a 65 year old. “I’d write letters and make calls,” he says.

Bill Bell is nothing if not persistent. The last time he finished in Kona he was 78, but he is proud that four over 80 year olds have finished under 17 hours .

Bell and his fellow Iron Gents consistently push the age envelope. “We now have 80-84 and an 85-89 division,” he says proudly. “And I just finished up getting approval from USA Triathlon for a new age group for us 90-94 year olds. 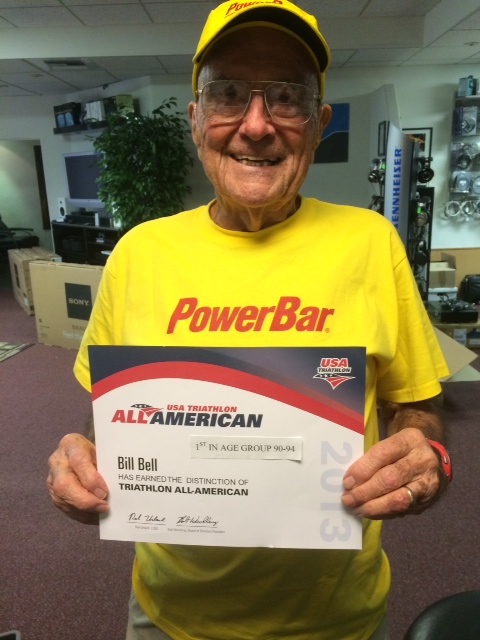 As he nears 90, the machine doesn’t function quite so well.  His hearing is going and he has a pacemaker, a bad knee and exercise-induced asthma. He and his 88 year-old-wife Margie, who is battling lung cancer, just celebrated their 65th wedding anniversary. They were married on September 8, 1946.

But Bill Bell is still out there racing in his very own 90-94 year old division – there are three other 90+ triathletes on the east coast – and he feels that triathlon is the reason for his longevity. “I put my brother in the ground when he was 70,” admits Bell. “Triathlon is special and it is something I will do forever.” 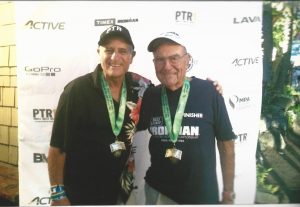 Listen to an interview with Bill Bell, recorded in 2015, here