Recently, a friend sent me a link to a piece of video from what we think was Robin William’s first ever triathlon experience at the Malibu Triathlon in 1997 where he rode the bike on a relay team with two-time Ironman champion and great friend Scott Tinley. In the video were triathlon legends Paula Newby-Fraser and Wendy Ingraham hanging out with Robin after the race.

What Robin did for our sport and for the Challenged Athletes Foundation was to bring credibility and awareness. The media came in droves to get sound bites from this huge celebrity who wanted nothing more than to hang out with the athletes and enjoy the day. When Robin spoke on camera in glowing terms about his love of riding his bike and his respect for great athletes like Scott Tinley, Paula, Wendy, and CAF athletes like Rudy Garcia–Tolson, our sport – and CAF – took a huge leap forward.

For the past few days, because of Robin’s long time support of CAF – he rode his bike at our San Diego Triathlon Challenge on Team Braveheart with Rudy and Scott Tinley eleven times – we have been asked to share our memories of this amazing man. 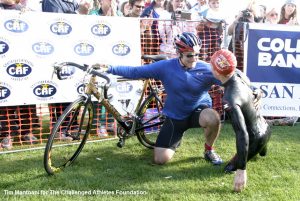 I have a few that stick out. One was in 2003 or 2004 when Rudy was honored up at Nike with the Casey Martin Most Inspirational Award. Casey came on stage and said that, since the award was named after him, he would like to present it… but a good friend of Rudy’s, who had performed the night before in New York, had flown all night in order to be there to honor his friend Rudy.

Robin came bounding out on stage with his usual off-the-charts energy:

The crowd erupted. No one knew how to make an entrance like Robin Williams.

A few years later we were at our San Diego Triathlon Challenge event at La Jolla Cove. The media trucks were out in droves and they were there to get an early morning sound bite from the Academy Award winner. Robin understood that while the media came to talk to him, by being there they would discover the greatness of the challenged athletes and the cause.

But these early morning interviews were always fun for me to watch for another reason: Putting a live microphone in front of Robin Williams was sort of like putting a piece of raw meat in front of a lion. You can get away with it sometimes, but it’s a tad risky.

The reporter asked Robin how he would be feeling after finishing his 56 mile bike ride that morning. Robin lit up and the lion was about to pounce:

“How will I be feeling? Thanks for asking! One thing I know for sure…there will be a river of sweat flowing down the crack of my ass the size of Niagara Falls …..oh, is this live TV?”

What Robin loved best about the San Diego Triathlon Challenge was each year felt like a huge family reunion and the fact that there wasn’t the usual autograph or photo frenzy he would face in other places. Our athletes and supporters would simply come up to him, shake his hand and thank him for being there and for his support. 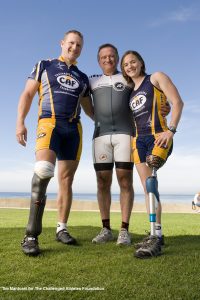 The saddest part is knowing that our long- time friend will not be there with us at La Jolla Cove this October.

The silver lining? Our memories of Robin, the guy who loved to ride his bike and give back to others, will live on forever. 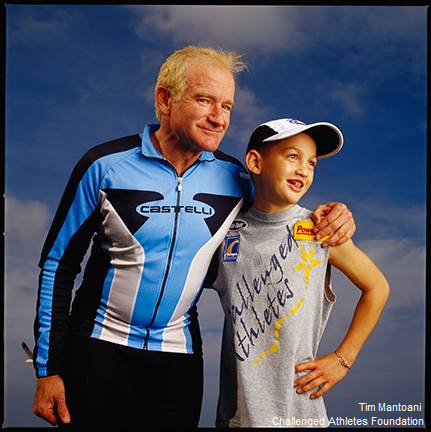