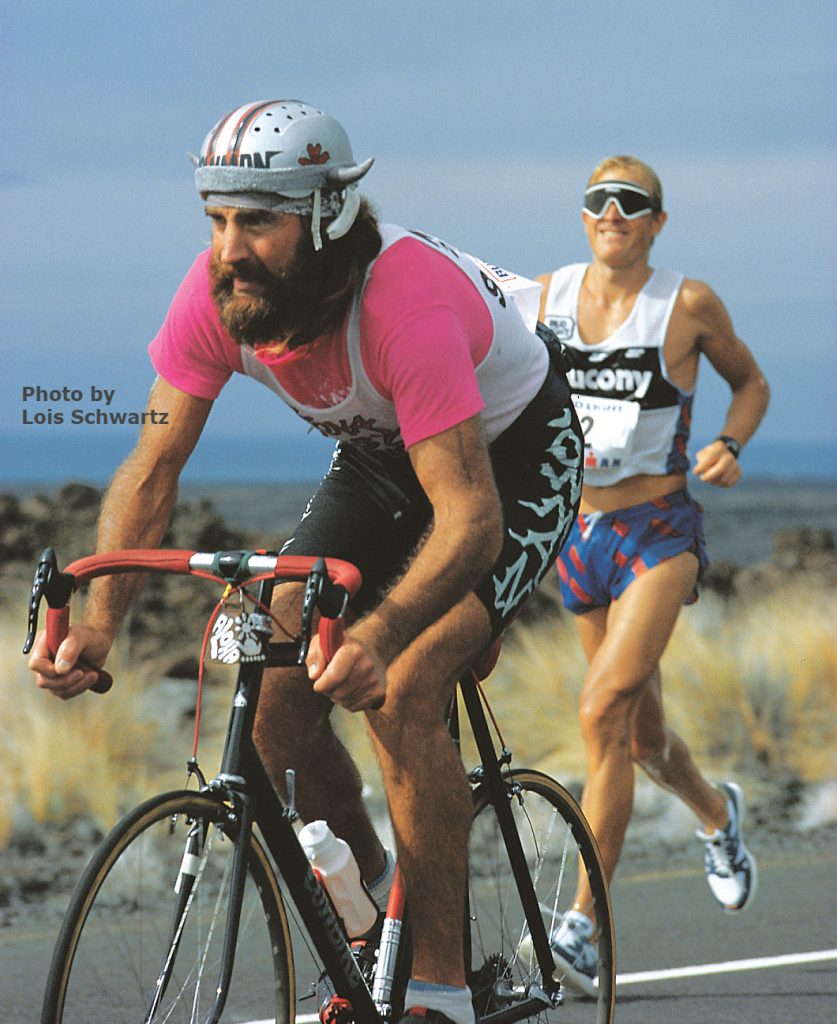 Eventual winner Scott Tinley runs toward the finish as Ken Shirk, aka Cowman, finishes the bike in this classic image of the 1985 race, the last year of amateurism at Ironman Hawaii. Photo: Lois Schwartz

Every time I look at this one particular image, it makes me laugh. Technology, money, media, and the masses were coming fast, but the classic image of Cowman on the bike wearing his miniature cow horns in the same frame as the eventual champion never gets old. Even 33 years later, it continues to capture the spirit and define the event known as Ironman.

Scott Tinley is on his way to winning his second-ever Ironman World Championship in 1985, wearing his own line of funky clothing and devoid of his trademark mustache. Back then there were no other Ironman events in the states. This was long before Lake Placid, Panama City, Coeur d’Alene, Madison, and Tempe. Yeah, there were a few Ironman events around the world but Kona, then and now, was still the whole enchilada.

The sport was growing, but still incredibly small. Nowadays the leader of the Ironman World Championship is always surrounded on all sides by television helicopters, officials, sponsors, spotters and media vehicles. Back then? It was ST and our convertible, with myself, my business partner Lois Schwartz, the world’s greatest sports photographer, and the driver. No one else was in the same zip code.

We didn’t think much of it at the time, but the photo symbolizes what the Ironman had always been about. John and Judy Collins, Ironman’s creators, had always envisioned fast guys and gals up front battling for the win while average, everyday folks joined them on the same roads simply to do something they thought was impossible.

In 1976, Cowman became the second runner (sans horse) to complete the Tevis Cup 100 mile horse race from Squaw Valley to Auburn, Calif. True to his adventurous nature, in 1979 Cowman went to Oahu and finished the second Ironman in 16:41.

But 1985 would prove to be a pivotal year for the Ironman. Dave Scott had won his fourth title (and third in a row) in 1984 and became the first person to break nine hours. He went 8:54:20 with Scott Tinley in second and Mark Allen in fifth. For his win, Scott received a trophy. Other races were offering prize money, and Scott, Scott Molina, Allen and Tinley were making a living as professional triathletes. The Nice Triathlon, with international TV and big money, was hoping to replace Ironman as the most important event in the sport.

In 1985, Tinley was the only top pro racing Ironman. Dave Scott didn’t race because he was getting married that October, and he was actually working for ABC that day. But his absence in the race was making a statement. The races he participated in had to offer prize money, even one he had dominated three years in a row.

As we drove along next to Tinley, we chatted about the race and how good he felt. The next thing I knew the two of us were playing catch with a mini football that I happened to have in my pack.

It’s the World Championship. Scott Tinley is about to win his second-ever title. And we’re playing catch.

When you think of it in the scope of today’s perception of the event, it’s pretty bizarre. It was like he wasn’t in the middle of a major championship and there were no other people in the event. We were oblivious, simply playing catch and chatting about whatever came into our minds.

ST: “Not sure. What are you guys doing?”

Quite frankly, at the time it made perfect sense. When the San Diego Track Club introduced the sport of triathlon in the 1970’s, people like Scott Tinley and others like him hopped on board to do something that was a little different. It was really all about getting away from running the roads for a day or two. How much running could you really do without breaking down or having your brain turn to mush?

So swim, bike, and run was all about creating variety and options, not creating a new fitness craze or an Olympic sport. Scott Tinley was going to become a paramedic. Dave Scott was a swim coach. Mark Allen was a lifeguard. Scott Molina was flipping burgers at a K-Mart in Pittsburgh, California.

Playing catch on the Queen K Highway would probably get the leader of the Ironman disqualified nowadays for getting outside aid.

It was just two guys loving their new sport and sharing a pretty special moment in time.