The room is 90 square feet and, when he works out, he simulates the toughest race day conditions by pumping up the temperature to 100 degrees and the humidity to 100% . He trains by riding his bike on a CompuTrainer and running on a treadmill. With the right software, he can simulate the elevation profile of any bike or run course on the triathlon circuit. His swimming is still not great, but there is little doubt that, after winning the Ironman 70.3 in Oceanside in April and then following that up by winning the Ironman 70.3 North American Championship in May in St. George, Utah, he just might be the best cyclist and runner in his sport right now.

After getting hit by cars four times while out training on his bike, the Windsor, Ontario resident moved his training indoors for safety reasons, but the byproduct is that he is now faster and stronger than ever before.

At St. George, he came out of the 1.2 mile swim 4:30 down to the leaders, caught everyone during the 56 mile bike ride, including uber cyclist and 2014 Ironman World Champion Sebastian Kienle of Germany. He built on his 25 second lead out of transition during the 13.1 mile run and ended up with the most important win as a professional triathlete. As he crossed the finish line, his dad was there to embrace him and the two were both in tears.

What the finish line crowd witnessed was a very special moment between a father and his son.

If they knew the backstory, they would have realized how very special this moment really was.

Lionel Sanders was a talented runner in high school, but at the end of his senior year and then into college, he changed. “I got into serious partying,” he admits. “That’s where my personality came out. I got into it a little too extreme and got to the point where I couldn’t get out of it. I needed drugs to feel much of anything.”

The personality traits that now make him great as a professional triathlete fueled Lionel’s destructive nature as he got deeper and deeper into alcohol and drugs. He used money his parents had set aside for his college years to feed his substance abuse and he spent the next four years fueling his addictions. “Then I became ashamed,” he continues. “I started to hate myself. When I brushed my teeth, I wouldn’t look at myself in the mirror because I was ashamed of what I was doing and what I was becoming. When you feel shame inside…deep, deep shame…, you feel uncomfortable in your own skin. I ended up hating myself and hating my life. I was destroying my body. I had this great family who gave me every opportunity and here I was just pissing it all away.”

One day, Lionel Sanders decided to get back to his roots and went for a run. “Even though I felt like crap,” he says, “I ran every day for a solid month.”

Then he decided, out of nowhere, that he wanted to do an Ironman Triathlon. “I had no idea what an Ironman actually was,” he laughs. “I had to google ‘Ironman’ to figure out what I’d be doing.”

He convinced his mom to put her credit card down for an entry into the 2010 Ironman Louisville and, since he didn’t have any money or a car, mom and dad drove him to the race, took care of the hotel room and bought him his first tri suit for race day. “Being great parents,” he continues, “they never lost their belief in me.”

Sanders finished his first full Ironman in 10:14 and was hooked. He knew he was at a crossroads and needed to make a serious change in his life. And soon.

“I woke up in detox a number of times,” he continues. “If I stayed on that self- destructive path, I saw what my fate was, and it wasn’t pleasant. I met guys in detox who were just like me, but a couple years further down the path. I realized that I wanted something more from my life.”

Lionel Sanders has made an amazing transformation and is now on one of the very best triathletes on the planet. More importantly, when he brushes his teeth in the morning, he has no problem looking in the mirror.

Because he likes what he sees. 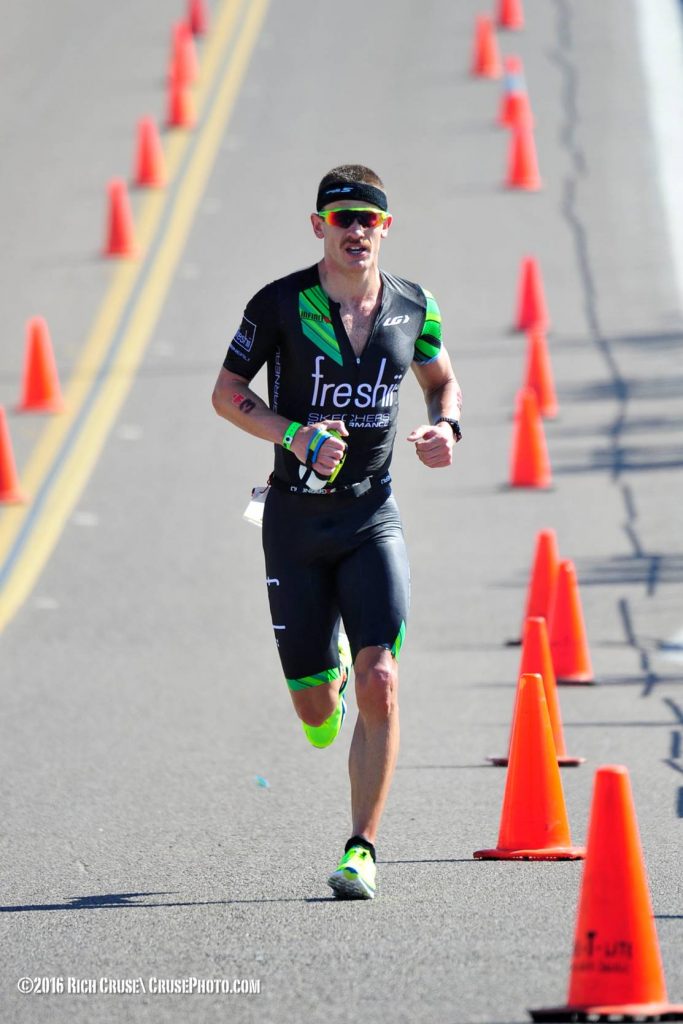 Here is our Breakfast with Bob interview with Lionel Sanders from Ironman Week in Kona last month:

Lionel Sanders has won just about every race he’s entered as a pro. Last year was his first time racing here in Kona, and his 14th place finish taught him a lot. We chatted about all the lessons he learned from his Ironman World Championship debut, and how he’s changed his training for this year.