I wrote Changing Everything for my editorial in the May/June issue of RACEPLACE Magazine. I’ve received so many comments from readers, that I decided to republish it here.

I knew I had definitely gained some weight over the past 30 years, but in my mind the solution was simple. All I had to do was start training for a long-distance triathlon again and I’d be magically transported back to my racing weight of the mid-1980’s. I thought the reason that I had gained weight over the years was tied to aging — I just turned 65 — and a normal slow- down of our metabolism.

In January of 2015, after finishing a workout at Orange Theory, I spotted a mobile unit in the parking lot that was doing Body Composition Analysis (bodyfattest.com). They weighed you dry and then in a dunk tank to really let you know where you stand.

During that test I weighed in at a robust 184 pounds, my body fat was 24.4 percent and I had 44.95 pounds of fat in my body. Did I think to change my eating habits? No. Did I vow to ride, run, swim, and take hot yoga more often? Absolutely.

But nothing really changed for me until I interviewed Dr. David Clayton on one of my Babbittville Radio shows last July. Dr. Clayton had left Scripps Hospital to open up a fitness and nutrition center. During the interview, he told me that he was tired of prescribing medication for his patients over 50 and the idea behind his fitness center was to have people combine nutrition and training to take better control of their lives.

I told Dr. Clayton that I really never thought about what I ate and there was no way I was going to become one of those eat-five-meals-a -day people who are constantly measuring their food and thinking about everything they put into their body. I asked the good doctor to give me a verbal clue, something a simple person like me could think about before I jammed something bad into my mouth. What he said was so simple and, to me, it made all the sense in the world: “If it wasn’t around a million years ago, don’t eat it,” Dr. Clayton insisted. “And, if it has a label on it, it wasn’t around a million years ago.”

This was in July 2015. The next day I changed everything. I stopped eating bread, grains, pizza, sugar, salt, butter, soft drinks, alcohol, dairy, and gluten. My drink of choice became soda water with lime. My wife bought in 100%, which is essential; and, using some of Dr. Clayton’s recipes and also creating her own, started making breakfast muffins for me using almond flour and other treats using coconut oil and coconut milk.

I started eating two of the muffins each morning with a banana along with an apple or an orange. By September, I noticed that my shorts and jeans were getting loose and I needed a belt for the first time in years.

The most amazing part of this journey was that I wasn’t training any more than before I drastically changed my diet. I learned that the key to losing weight, in my humble opinion, is 95 percent diet. 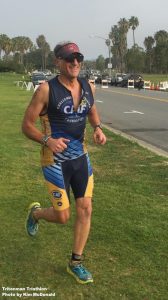 My energy is constant, I feel like I’m eating more food than ever before, and I feel so much better when I’m working out. Imagine running with two 10-pound bowling balls and then running without them. I learned the hard way that without them is awesome!

The best part? Even though I’m now 65, I’m back to my racing weight from the 1980’s and racing pretty darn well. I’ve even convinced some of my fellow members of the 60-to-death age group to give the Million Year Plan a go, and every one of them has lost weight immediately.

Now, I’m not saying this program will work for you. All I’m saying is that it works for me and I feel better than I have in years.

See you at the races. I’ll be the guy asking for a medium race shirt!

Listen to my Babbittville Radio interview with Dr. David Clayton

1)  When I look around, I notice that there are not that many overweight 80-year-olds. I think if we want to live to 80 and beyond, we’ve got to be lean.

3)  You can’t do this alone. In order to really change your diet, your significant other has to buy in 100%.

4)  Eating this way means grocery shopping more often and keeping the house stocked with lots of fresh fruit and vegetables.

5)  I have not become a vegetarian or vegan. I eat steak, chicken, fish, and eggs.

6)  Seems like every commercial on TV is for bad stuff that will chunk you up. Pizza, soft drinks, alcohol, and candy commercials are on all day long. Ignore them. Having willpower makes you beyond tough.

7)  In the past, after a long bike ride or run, I’d treat myself to a pizza, a huge sandwich, a coke, or ice cream. When I did that, I was just taking on more calories than I’d burned during my workout.

8)  I thought travel was going to make it tough to stay on my program, but it really hasn’t. You can always find hard boiled eggs, plus fruit, salads, and veggies at the airport. Just throw away the dipping sauce and you are good to go.

9)  I realized that for years I used to ‘carbo-load’ a few days before a long race and I was always sluggish on race day. I know now that my body functions way better with less and better food in my belly.

10) Wearing a medium shirt and pants with a 32-inch waist again is pretty damn sweet. I even had to bring my sports jackets in to the tailor and have them taken in.