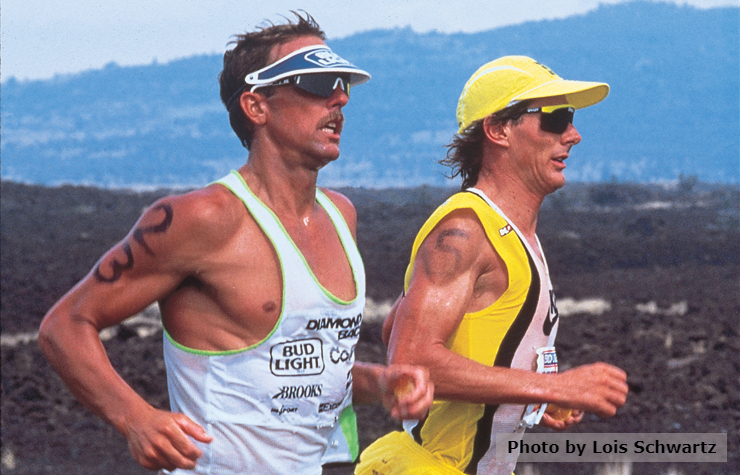 Mark Allen came to Kona five times trying to win the Ironman and to beat Dave Scott. On his sixth attempt it finally happened.

I am sitting in the back seat of a Ford Mustang convertible on the Queen Ka’ahumanu Highway in the middle of the afternoon on Saturday October 14, 1989. There is an entourage of vehicles surrounding two runners, one dressed in yellow and one dressed in green. The two have been within a second or two of each other since 7 am that morning.

It all started in October of 1982 when the 1980 Ironman World Champion, Dave Scott, was once again racing the Ironman. He was returning from the bike turnaround in Hawi with only one other cyclist in the same zip code. The other cyclist’s name? Mark Allen, a lifeguard from San Diego who had come to Kona hoping to finish in the top 100.

The event was being televised by ABC’s Wide World of Sports for the fourth time and the first time since February of 1982, when Julie Moss collapsed for the last time within 50 feet of the finish line and, while she crawled for the line with most of America watching, was passed by Kathleen McCartney in a moment that to this day was the most important in Ironman history. McCartney won, Moss took second, but that was just the beginning of the story. When Moss was carried off on a stretcher and Wide World of Sports moved on to Cliff Diving or Barrel Jumping without telling the audience what the heck had happened to this young woman, the switchboard lit up at ABC like a Christmas tree. Who was this young red headed co-ed, viewers wanted to know? Was she alright? And what was it about this crazy event on the Big Island of Hawaii that would push someone to actually crawl to get to the finish?

The response was so amazing that ABC flew Julie Moss and Kathleen McCartney to New York a week after the show aired to go on with celebrated journalist Jim McKay to reassure the American public that the two were okay and this Ironman event was pretty darn special.

How special? Ironman added a second event in 1982 in October that sold out immediately and a former UCSD swimmer by the name of Mark Allen, who knew Julie Moss from lifeguarding and would actually one day marry her, decided that training for this Ironman thing would be a nice diversion from possibly going to medical school.

Eric Heiden, the Olympic speed skating legend and cyclist, was doing the commentary for ABC that day and mentioned that this young man Mark Allen looked great on the bike, definitely smoother than Dave Scott.

On the screen for the viewers at home, they had Dave Scott’s name under his image and Mark Allen’s as well. One problem. They knew so little about this newcomer that his last name was spelled ‘Allan.’

No matter. As Mark Allen came side by side with Dave Scott, the first words he ever spoke to The Man, were, “Hey Dave….how about we go for a run after the bike ride?”

“I was trying to be funny,” remembers Allen. “Dave wasn’t amused and went ‘who are you?’ I told him my name, he told me that he had heard of me, then he switched gears and took off. So I did the same thing.”

One problem. Allen’s derailleur failed and he was left with one gear -the hardest- for the rest of the bike ride.

He ended up hitchhiking back to town and his race was over.

“Even though my goal was to finish the race in the top 100 and I didn’t finish at all, I still came away feeling like I could be good at this sport,” remembers Allen. “I was right with the best guy in triathlon when I had a mechanical problem. I was looking forward to coming back and giving it another go.”

Mark Allen made a name for himself around the world, eventually winning the Nice Triathlon ten times and earning the nickname ‘The Grip’ for his ability to simply push the pace to the point where no one could hang with him. He didn’t show pain and his facial expression never changed. Other athletes feared Mark Allen in other places, at other races. But when it came to the Ironman, the race belonged to Dave Scott.

“When a race was over six hours, that was when Dave really shined,” admits Allen. “He also thrived in the heat and wind of the Ironman. As soon as I got off the plane in Kona, I couldn’t believe that I would have to race in those conditions in a few days. I dreaded and feared the place. Dave embraced it.”

Allen took third in 1983 and in 1984 had a 12 minute lead heading out on the marathon. “I thought the race was in the bag,” Allen says. “The run was my strength and I couldn’t imagine losing that big of a lead in 26 miles. I was high fiving people as I ran down Ali’i Drive. When I got to the base of Palani as we headed out of town, I knew I was going to win the Ironman. A few minutes later, at the top of Palani, as I headed out on the lava fields, I had absolutely nothing left and knew I was going to lose.” 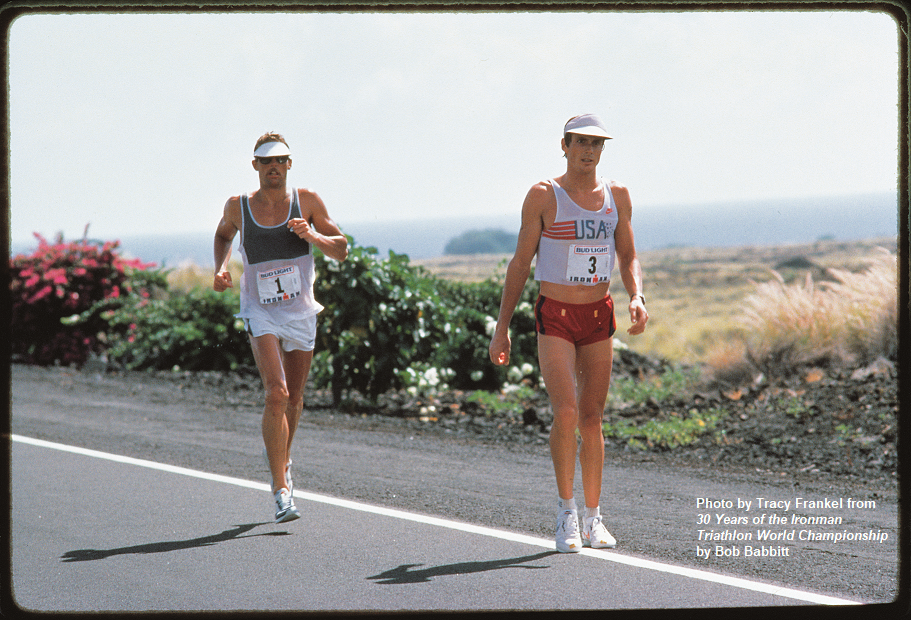 Dave Scott stormed by Allen as he was walking about 13 miles into the run. “A 12 minute lead doesn’t last long when you’re walking the Ironman marathon,” he laughs.

In 1986 Allen took second to Scott and in 1987 he took second again after building up a five minute lead with about eight miles left in the marathon. This time he was forced to a walk as Scott stormed by once again, this time on the other side of the ABC van. “I was in bad shape,” admits Scott. “I went around the van because I didn’t want to run up next to Mark and have him try to go with me. Those last four miles to the finish were horrible.”

While Dave Scott was celebrating his sixth Ironman title, Mark Allen was rushed off to the hospital with internal bleeding and was left to wonder if this race was healthy for him or if it was time for him to listen to his friends and family and simply move on.

In 1988 Dave Scott pulled out the night before the race and Allen thought this would finally be his year.

He ended up with three flats and took fifth.

In March of 1989 I reached out to both Dave and Mark to do a photo shoot with them leading into the 1989 Ironman. In my mind, this was the year that we were going to have a real race. I would shoot them back-to-back for my Showdown on the Kona Coast cover of Competitor Magazine.

One small problem. Dave was in Davis, California and Mark was in Boulder, Colorado and, while they both agreed to do the shoot, neither was going to travel to make that happen.

“Happy to do it,” said Dave Scott. “Have Mark fly here to Davis.”

Neither would budge so I hired photographer Dave Epperson and had him bring a backdrop with him, shoot Dave in Davis and Mark in Boulder and then we put them back to back on the cover of the magazine and created some fun shots inside as well. 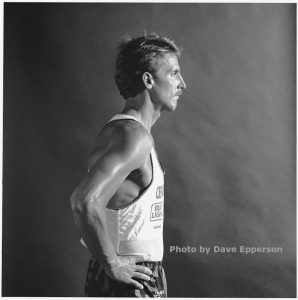 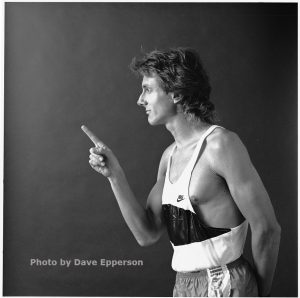 Who knew it would work out so well? 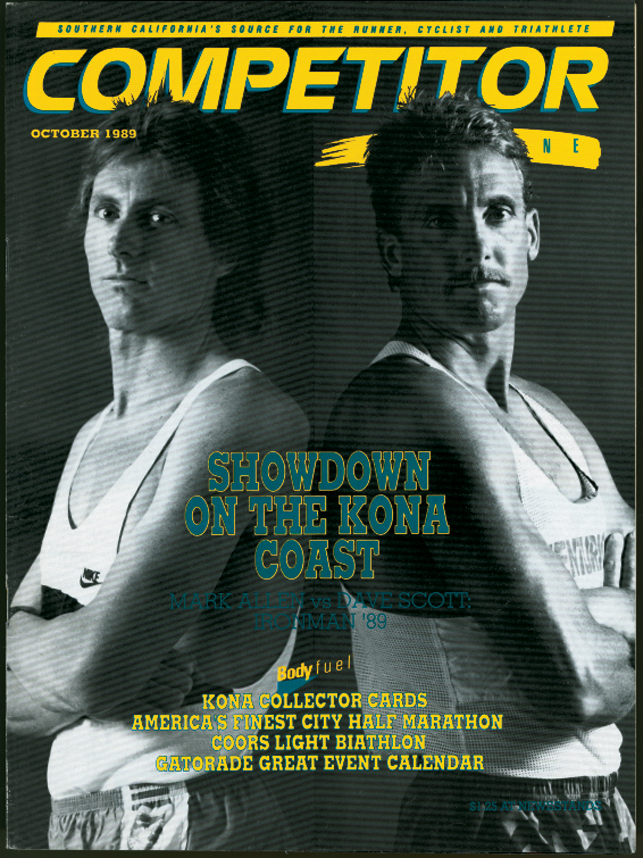 That spring Allen had spent a training block in New Zealand with Erin Baker and Scott Molina. Life was simple. Ride, run, swim, eat and sleep.

“I realized that if I was going to go back to Kona, I couldn’t worry about beating Dave,” Allen insists. “I wanted to go back and finally have the best race I could over there. In the past I had done well in races six hours and under. Ironman was a different beast and I had to put in eight and nine hour training days to be really ready for race day.”

He did and he was.

From our Kona Countdown, a sound bite from Scott Molina on training with Mark that spring in New Zealand…..

Today’s #KonaCountdown comes from 1988 Ironman World Champion, Scott Molina. I interviewed The Terminator about his career, and he chatted about training with 6-time Ironman World Champion Mark Allen in 1989, leading in to the greatest Ironman in history: IronWar with Dave Scott. We got a classic Molina description of Mark: He Was Just That Bloody Good! Listen to the sound bite here. Enjoy the full interview with Scott Molina here: www.babbittville.com/babbittville-radio/scott-molina/ . #babbittville #IMKona @markallengrip @ironmantri

Allen and Scott were together out of the water and then, during the ride, Allen was behind Scott, watching his every move. “I never saw Mark’s face during the bike ride,” admits Scott.

But he knew Allen was there.

Off the bike, Dave Scott set a brutal pace. “We were side-by-side and the first eight miles through town were really fast,” remembers Scott.

As they entered the meat of the marathon on the Queen K Highway, our entourage of vehicles surrounded the two and it was dead quiet, the only sound their running shoes hitting the pavement. It was like they were racing in this cocoon of silence.

Why were we all so silent? Because we realized we were witnessing history, that the closer Scott and Allen came to downtown Kailua-Kona still side-by-side, the more exciting and legendary this day was going to be for the sport of triathlon, for the Ironman, and for Dave Scott and Mark Allen.

Allen was finally having the day he had been dreaming about and he did his best to quiet his mind as they approached mile 23.

“Dave had been stronger on the downhills throughout the run,” remembers Allen, “but I was stronger on the uphills. As we approached the last long climb a little past mile 23, we came to an aid station. Dave reached out to get fluid and I did as well. Then something told me that it was time to go and I pulled my hand back without taking aid and sprinted as hard as I could.”

From our Kona Countdown, a sound bite from Mark Allen on making his move….

#KonaCountdown 3 days Side by side for 8 hours. After years of defeat, it all came down to a move in the final miles for Mark Allen to finally beat Dave Scott and win IronWar in 1989. . #IMKona #babbittville @ironmantri @markallengrip 📷 Lois Schwartz

From our Kona Countdown, a sound bite from Dave Scott on Mark Allen making his move…

#KonaCountdown 4 days It was the moment of truth. After being side-by-side for nearly 8 hours with Mark Allen in 1989, Dave Scott knew that it was almost time to make his final move to win his seventh Ironman World Championship title. Only one problem. Mark Allen was in the midst of making his move to win his first. . #IMKona #babbittville @ironmantri @davescott6x 📷 Lois Schwartz

Allen looked back up the hill after he took the left turn at the bottom of Palani and at that point he saw the most beautiful sight ever: an empty road.

As Allen came down Ali’i Drive knowing that he was about the win the most important title in his career, the reality set in and the tears started to flow. 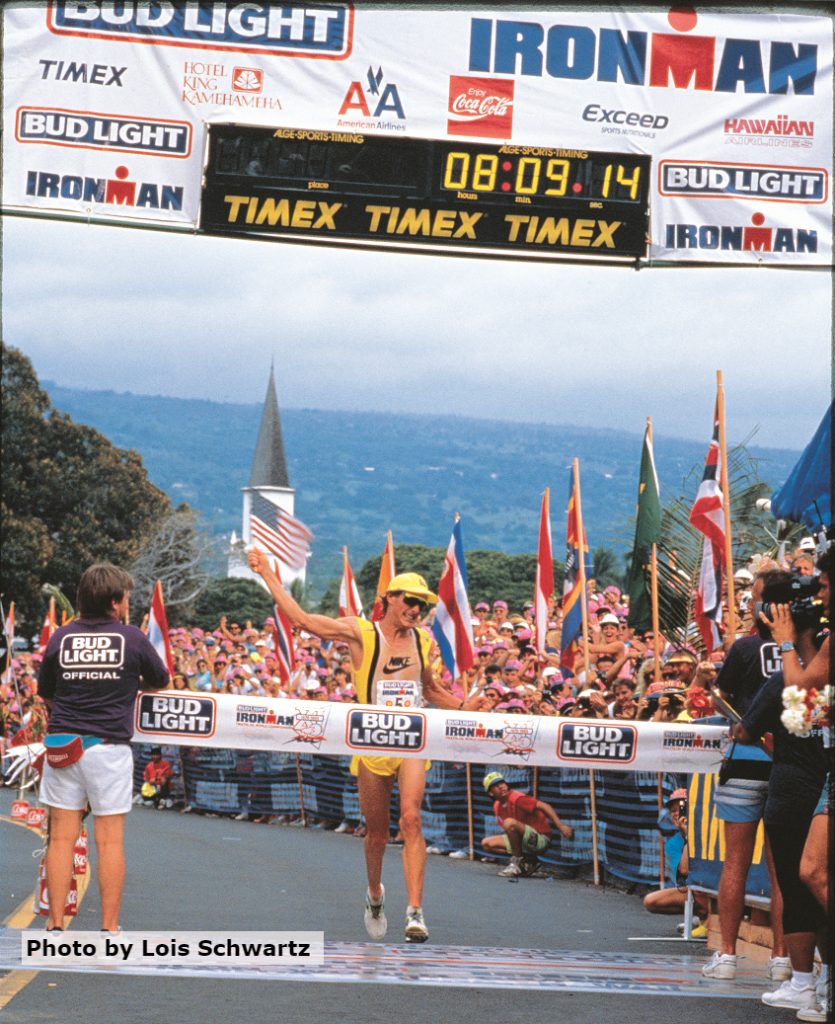 Dave Scott hated losing that day, but he knew deep down that he had had a great race but that Mark Allen had simply been better.

“The race went exactly how I predicted it would go,” Dave Scott said at the time. “Except the finish was wrong.” 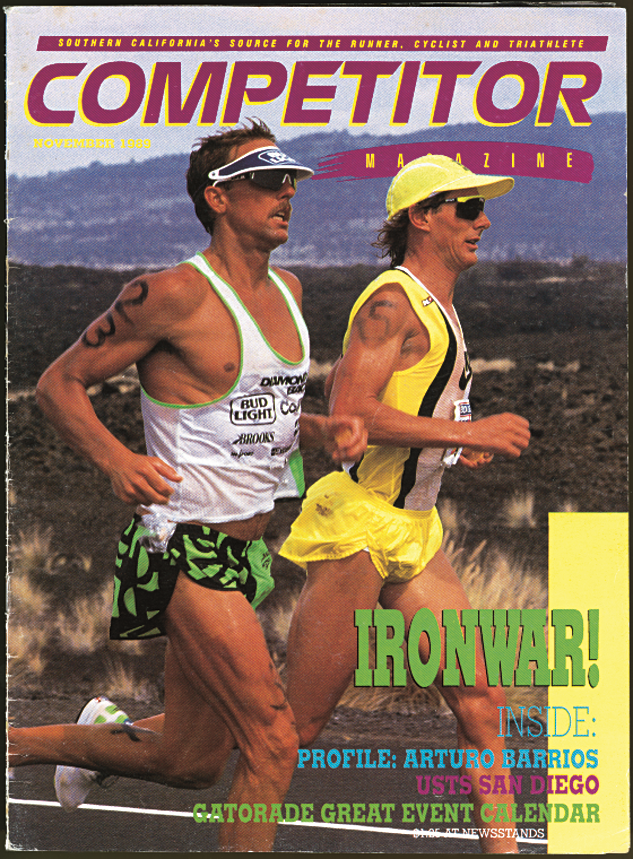 Dave Scott and Mark Allen discuss their 1989 Iron War on Breakfast with Bob in Kona, October 2014

Looking Back at the 1988 Ironman 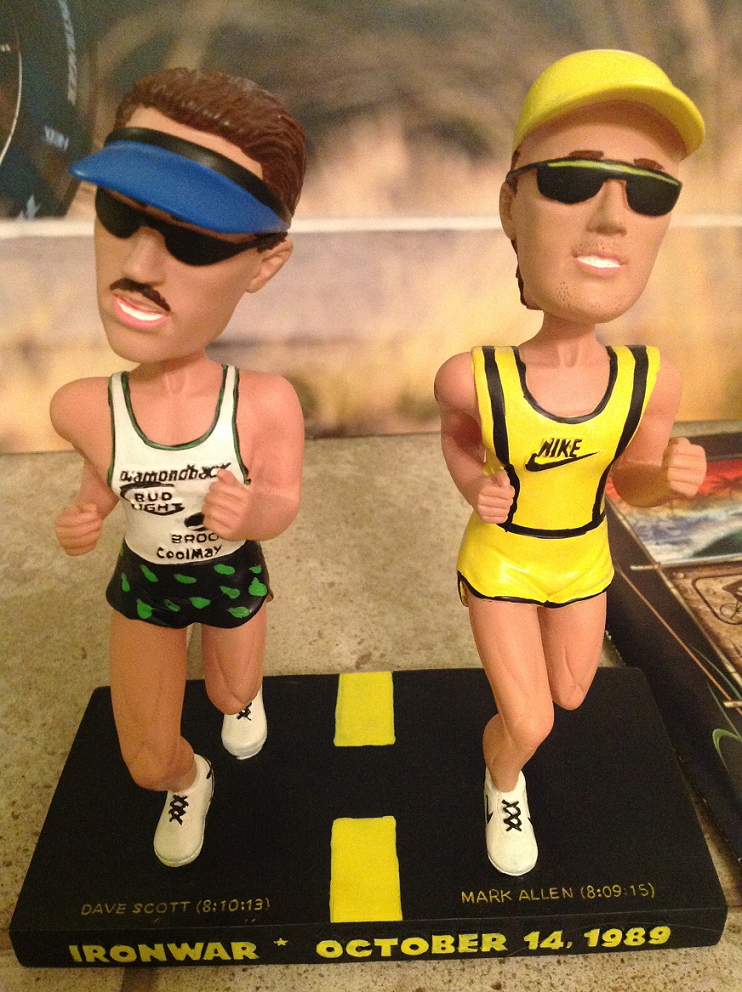