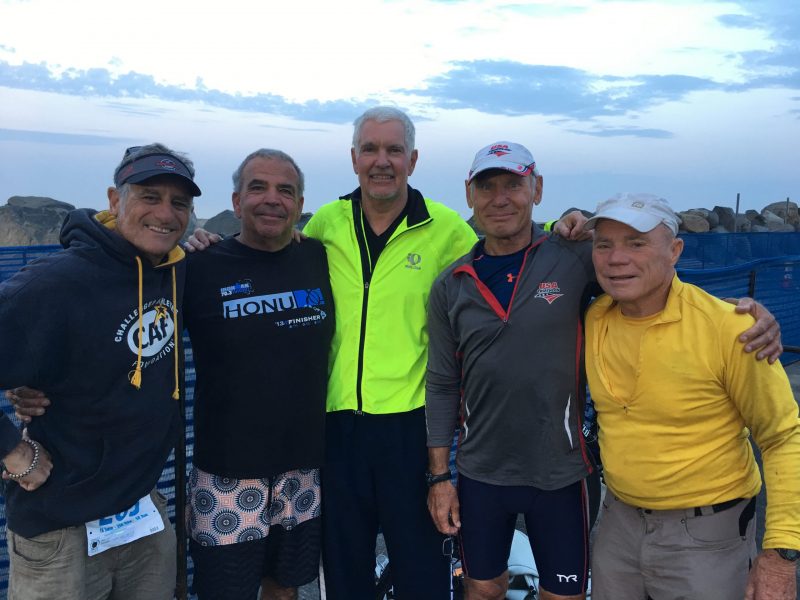 What is it about this sport that drives people to get up at 4:00 am, drive over to the start by 5:00 am and then put on a headlamp so you can set up your transition area at 5:30 for an event where your wave won’t jump into the water until 8:10 am?

It’s funny. It would make a lot more sense to sleep in and then head out for a run, bike or swim at 7:00 with a friend.

But for my transition buddies Tony, Steve, Gary and John, these two hours of chatting and hanging out turn out to be as enjoyable as the race itself.

This morning we are at Camp Pendleton north of Oceanside. Last Sunday it was Solana Beach. Next weekend we’ll take the show to Chula Vista.

A few weeks ago we watched the day begin from a transition area on the beach in Carlsbad.

If I had slept in and worked out on my own? I wouldn’t have been there last week in Solana Beach when the skies opened up with thunder and lightning and this really bright group of lawyers, doctors and PhDs channeled our early frat guy and simply ignored the downpour as we drank cold beer while standing in the warm rain with our finishers medals proudly on display, despite the fact that wearing a medal is probably not the brightest thing to do in a lightning storm.

Did we care? Not much. 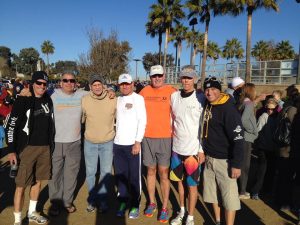 The gang posing for a post-race photo in January, 2014. Photo from Tony Berg

Steve is heading off to the USA Triathlon National Age Group event in Milwaukee next weekend. Tony just finished winning the Aquabike division at the Vineman 70.3. Gary is getting ready for Ironman Arizona in November and it obviously humors him and keeps him sharp to run by me every weekend. John just likes to race every week.

Here’s a quick question. What sport can you actually get better at as you age? Not many.

Cold beer in warm rain, watching the day come alive as you set up your bike and joke with your buddies and, like yesterday, finishing your race up on top of a $20,000,000 Hovercraft?

John, Gary, Tony and I are all in the 60 to death category and people constantly ask us why we’re still out here doing tris after all these years.

Why? It sure seems obvious to me.