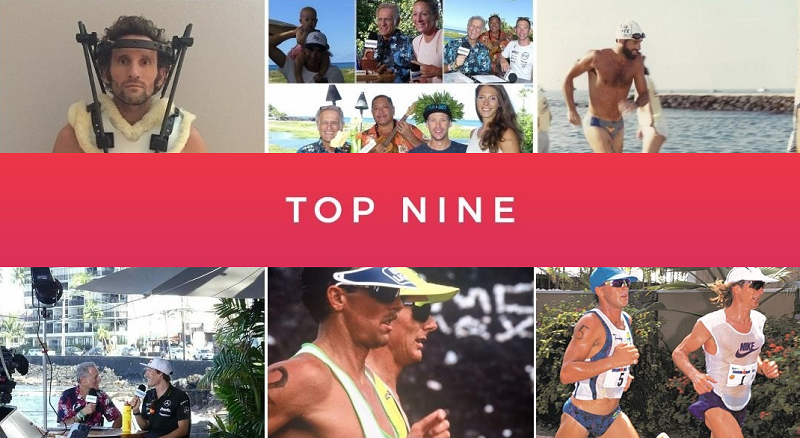 Thank you to all our great Babbittville on Instagram friends for helping make 2018 so great.
As we look back over our Top Nine Instagram posts, we reflect on some awesome highlights from the year….

#FlashbackFriday Part 2 Ironman 1991 Mark Allen won for the 3rd year in a row, this time battling it out with a young Greg Welch. In my 30 Years of the Ironman Triathlon World Championship coffee table book, I wrote about Mark and Greg’s race. Greg went in to the race feeling confident and ready to go head-to-head against Mark. I titled the story: Checkmate. Here’s an excerpt: The two are locked together in mortal combat. Sweat beads up on both foreheads as they survey the board and scan the memory banks. They search endlessly, desperately for the back breaker, the killer, the pièce de résistance… the mother of all moves. Pawns, rooks, and castles are all willingly sacrificed for the win, the only goal that matters. When you are on the other side of the table, the pause, that calm before the storm, can seem like forever. A deep breath is taken and “The Move” is finally made. A smile plays at the corner of the lips of the mover and the word that always follows the mother of all moves is spoken loudly and clearly, ending the game, ending the speculation, ending any what ifs. So goes the game of the Ironman. In the game of Ironman chess, sometimes the moves are so subtle no one seems to notice. But they’re there. Letting Greg Welch dictate the pace on the bike took that responsibility off Mark Allen’s shoulders. It also put his most dangerous competitor right where he wanted him most: smack dab in his sights. No worries like, “Where is that guy?” or, “How far back is he?” Allen played the Ironman chess game to perfection for the third time in a row. But he also knows that only three people have ever run a sub-2:50 in Hawai’i: Allen, Dave Scott…and Welch. Even though he had to stop and stretch for who knows how long this year, Welch still ran 2:48:10. So don’t count the young Aussie out, Ironman fans. He’s learned a few lessons from the Ironmaster. Both Allen and Welch know that this year is history, that the next time around they’ll start from scratch, that they’ll be playing Ironman chess all over again. It won’t take Welch many moves to turn Checkmate into Check…..Mate. 📷 Lois Schwartz

Read more from my look back at Iron War

7. Day 1 of Breakfast with Bob at Kona

Thank you to all our awesome guests today for Day 1 of Breakfast with Bob from Kona, and thank you to everyone who joined us at Huggo’s On the Rocks to be part of our wonderful “studio” audience! All of the interviews can be watched on Facebook and on the Babbittville YouTube channel. #bwbkona2018

We kicked off our 2018 edition of Breakfast with Bob from Kona on Monday, October 8th with a legendary line up of guests. You can watch the interviews on our Babbittville YouTube channel here…

#ThrowbackThursday ▶️ Looking back at my 1986 Ironman. The year I decided to focus on my swim. Things may not have gone to plan, but sometimes in the long run that can end up being a good thing…Read more 👉🏽 babbittville.com/1986-ironman/

5. Championship Edition of Breakfast with Bob from Kona

Thank you to our guests today on Championship Edition of Breakfast with Bob from Kona, and to the Four Seasons Resort Hualalai for hosting us. Watch today’s interviews with the women’s and men’s top Ironman World Championship finishers on the Babbittville YouTube channel. #bwbkona2018

Listen to the interviews on Babbittville Radio here.

4. Tim Don: From Halo to Hamburg

Tim Don: From Halo to Hamburg > It’s always great to talk with Tim Don. We last spoke in Boston, before he ran 2:49 at the Boston Marathon. After that, he won Ironman 70.3 Costa Rica. Next up on his quest to return to Hawaii? Ironman Hamburg this weekend. Enjoy our latest conversation on Babbittville Radio 🔗 in bio. Thanks @tri_thedon!

Listen to the Babbittville Radio interview with Tim Don here.

When we last saw Jan Frodeno on a race course, he was struggling in the lava fields of the Big Island, dealing with a back that had other ideas of how the day was supposed to go. Flash forward to last Saturday in Oceanside, and the race course images of Jan Frodeno were, to say the least, much different. Making a statement, you might say? I had the pleasure of chatting with Jan a few days after his record-breaking day. Enjoy! 🔊 on Babbittville Radio on ApplePodcasts, Stitcher, and the web > babbittville.com/radio 📸 @crusephoto #im703oceanside

Listen to the Babbittville Radio interview with Jan Frodeno here.

One of the top highlights of 2018 for me was meeting the Pease Brothers, Kyle and Brent, and getting to watch them race in Kona.

In case you haven’t had a chance to watch our Breakfast with Bob from Kona interview with Kyle and Brent, filmed a few days before they finished the Ironman World Championship, here you go…