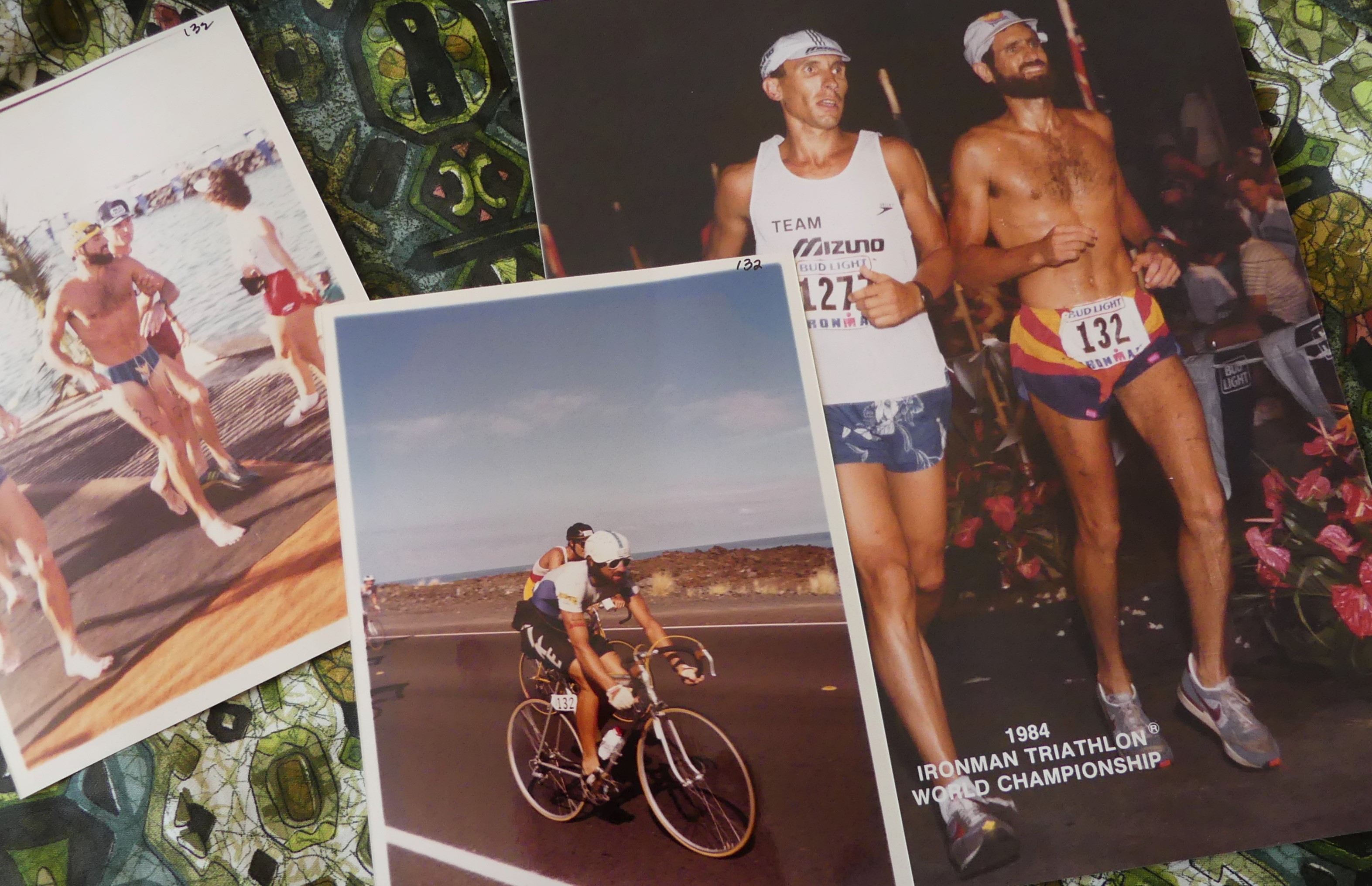 2018 is the 40th anniversary of the Ironman World Championship, and I’m looking back at each of my years at the Hawaii Ironman, starting in 1980 on the island of Oahu. I missed the first two years, 1978 and 1979, but since 1980, I haven’t missed a World Championship. Every Friday, I count down each year – from my experiences as a participant in the early 80s, to my early years covering the event as a journalist, through my many years covering the race at Competitor Magazine and publisher of the official race program, to the early days of the Ironman LIVE broadcast, and on up to the launch and continuation of the Breakfast with Bob show.

It all started for me at the 1980 Ironman on Oahu. Here I am riding through the pineapple fields, approximately 85 miles in, listening to tunes on my Radio Shack radio (on the handlebars), with a cool towel around my shoulders, courtesy of my awesome support crew, who had given me a root beer snow cone a few miles earlier. 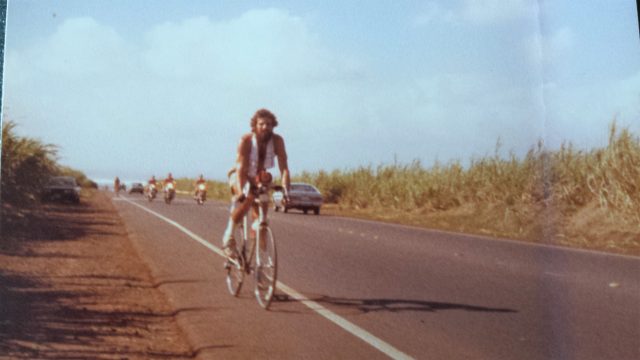 Racing that year along with me were my roommate at the time, Ned Overend, Dave McGillivray, Kurt Madden, John Howard, Tom Warren, Gordon Haller, and some guy named Dave Scott. 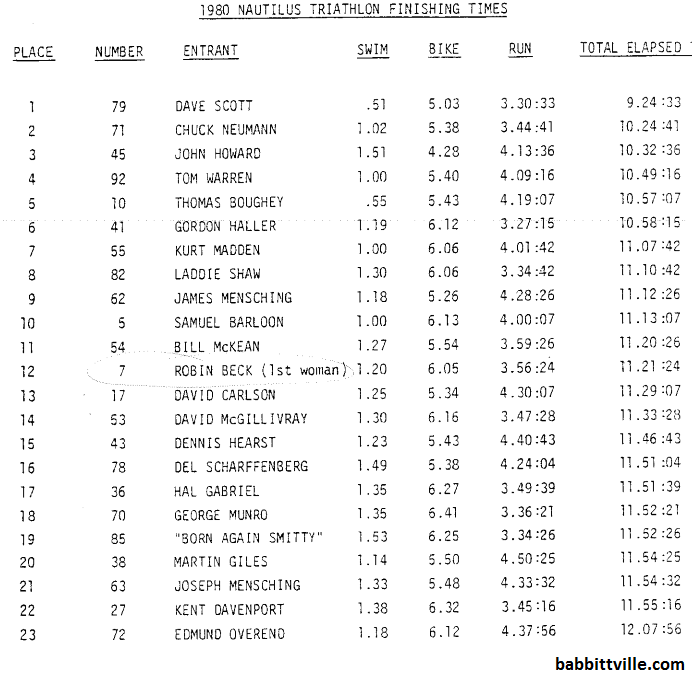 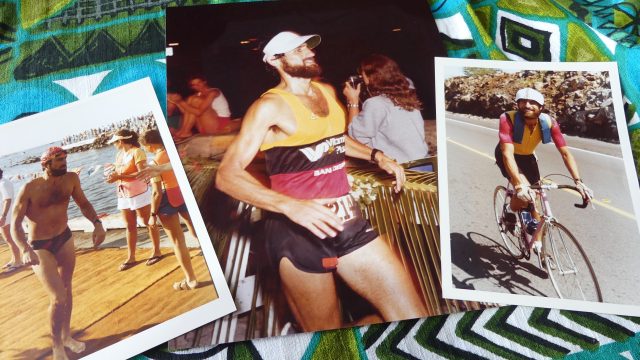 Today, I’m flashing back to my 3rd Ironman: February 1982. As you can see, I was still sporting my high tech and stylish Bone Fones, listening to the radio on the bike. While I was enjoying my day on the Big Island, history was being made ahead of me. I came down Ali’i Drive and crossed the finish line about an hour after two college students from California changed the face of Ironman and endurance sports forever… 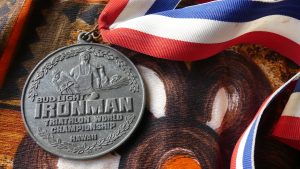 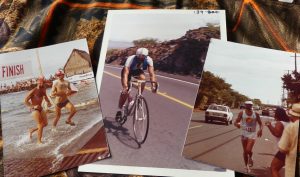 #FlashbackFriday Part 1 As we celebrate IRONMAN’s #40YearsofDreams, I’m looking back at each of my years at the Hawaii Ironman, starting on Oahu in 1980. Today it’s 1985. After finishing in 4th in 1984, Joanne Ernst won the world championship in 1985. Finishing in 3rd place in 1985 was a young Iron-rookie: Paula Newby-Fraser. For the men, Scott Tinley showed up with new high-tech aerobars on his bike, and took his second Ironman title in a record 8:50:54. ▶A page from the official 1985 race program lists the schedule of events, including two concerts with Jesse Colin Young. Ah, memories. #neverabadday #imkona

#FlashbackFriday Part 2 As we celebrate IRONMAN’s #40YearsofDreams, I’m looking back at each of my years at the Hawaii Ironman, starting on Oahu in 1980. Today it’s 1985. 1985 was the first year I didn’t race and just covered the event as a journalist. I wrote about a memorable experience on the Queen K. . Every time I look at this one particular image, it makes me laugh. Technology, money, media, and the masses were coming fast, but the classic image of Cowman on the bike wearing his miniature cow horns in the same frame as the eventual champion never gets old. Even 33 years later, it continues to capture the spirit and define the event known as Ironman. (Read more on babbittville.com) #imkona #neverabadday

READ about my experience at the 1985 Ironman here.

LISTEN to a Babbittville Radio interview with Scott Tinley here.

#FlashbackFriday It’s IRONMAN’s 40th anniversary, and I’m looking back at each of my year’s at the Hawaii Ironman, starting in 1980. This week it’s 1987. ▶ Erin Baker and Dave Scott were World Champions in 1987, and the great Lois Schwartz captured images of their races. ▶ A few fun memories from the official race program: the reach of Ironman events in 1987, and Mark Allen’s Pro Grain cereal ad, a thorn in Dave’s side. Mark came into Kona that year with a big time mainstream sponsor and no Ironman World Championship titles, while Dave Scott was the 5-time World Champion. Just more fuel for the growing adversarial relationship between the two greats, as we get closer to their historic IronWar in 1989. ▶ In the November, 1987 issue of Competitor Magazine, I wrote about Dave Scott’s 6th victory, and titled it Lord of the Lava. Read it on babbittville.com > articles (link in bio) 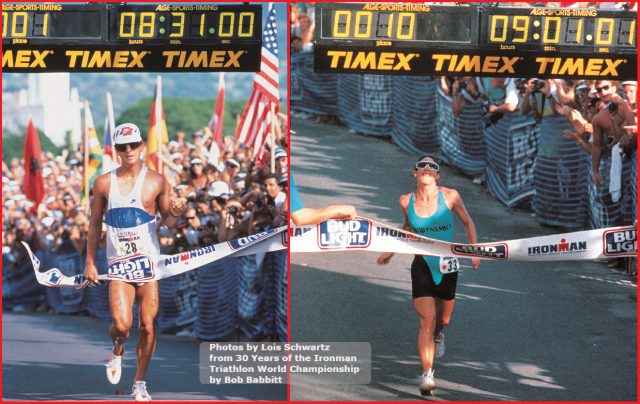 This week it’s 1988, when Scott Molina and Paula Newby-Fraser were victorious. Read my look back here: A Look Back at the 1988 Ironman

#FlashbackFriday 1989 Part 1
As we celebrate IRONMAN’s 40th anniversary, I’m looking back at each of my Ironman’s. This week: 1989. Paula Newby-Fraser won her 3rd title & Mark Allen finally beat Dave Scott & won his first of 6 titles in the race we call Iron War
📷 Lois Schwartz pic.twitter.com/TexduNUAnR

Read what I wrote for Competitor Magazine about this historic race here: Iron War